27 Jan, Thailand: Thai police have rescued hundreds of Rohingya Muslims from a remote camp in a raid prompted by a Reuters investigation into human trafficking.
http://www.reuters.com/article/2014/01/27/us-thailand-rohingya-idUSBREA0Q0IU20140127

By the end of 2013, around 2,000 Rohingya were detained in 24 stations across the country mostly located in the South under vastly differing standards. Some were overcrowded and caused the detainees to riot, others were regularly made accessible for human traffickersto lure refugees out.
http://asiancorrespondent.com/117734/siam-voices-2013-review-part-3-the-rohingya-unwelcomed-and-ignored-in-thailand/

12 Dec: Australia: Three asylum seekers including a toddler died when their Australia-bound boat sank in rough seas off Indonesia's Java island but 29 others were rescued, police said Tuesday.
The vessel had been carrying 32 people – including members of the Rohingya Muslim minority from Burma, officially known as Myanmar, Iranians and a Bangladeshi – who wanted to reach the Australian territory of Christmas Island, police said.
http://www.dvb.no/news/burmese-toddler-drowns-as-refugee-boat-sinks-en-route-to-christmas-island/35132

15 Nov, Bangldesh: Boats carrying Rohingyas fleeing recent violence in Pauktaw township in Arakan state landed in Bangladesh on Nov, arrived near Shamlapur area carrying 100 people; 25 women and 30 children were on board. Some of the 200 people were immediately arrested by Bangladesh police, but most managed to hide in nearby villages.
http://www.bnionline.net/index.php/news/kaladan/16490-hundreds-of-rohingyas-flee-from-pauktaw-township.html

3 Nov, Myanmar: A boat carrying at least 70 Muslim Rohingya capsized and sank Sunday off the western coast of Myanmar, an aid worker said. Only eight survivors have been found.
http://www.washingtonpost.com/world/asia_pacific/boat-carrying-70-muslim-rohingya-capsizes-off-western-myanmar-8-survivors-found-so-far/2013/11/03/02c17d6e-4468-11e3-b028-de922d7a3f47_story.html

12 Sept, Thailand: Some 250 Rohingya men aged 15-40 swam ashore in Satun's Thung Wa district yesterday morning after their boat was hit by a monsoon storm and their 15-day supply of food ran out.
http://www.nationmultimedia.com/national/250-Rohingya-men-swim-ashore-in-Satun-30214669.html

15 Aug, Bangladesh: only one woman is dead and three surviving people were found near the shore of Teknaf. The remaining 21 persons are missing.
http://www.rohingyablogger.com/2013/08/one-dead-and-over-20-missing-after-boat.html


16 May, Bangladesh: A trawler had capsized in the Bay of Bengal due to the impact of Cyclone Mahasen. Of the deceased, 15 were children, three women and four men,
http://www.ndphr.net/2013/05/15-kids-among-22-drown-in-bay.html

14 May, Sittwe:  A boat carrying about 100 Rohingya Muslims capsized off western Myanmar with many feared drowned at the start of a mass evacuation from low-lying regions ahead of an approaching storm
at least 50 people drowned when the boat went down at around midnight. It was one of six leaving Pauktaw
http://uk.reuters.com/article/2013/05/14/uk-myanmar-storm-boat-idUKBRE94D04R20130514

23 Mar, Thailand: The 108 boatpeople split into two groups, with about 60 swimming to shore on an island off southern Phuket, from India
http://phuketwan.com/tourism/phuket-rohingya-107-land-island-southern-phuket-india-17777/


10 Mar, Malaysia: 126 Rohingya refugees were found famished by local fishermen, as their cargo boat was on the verge of sinking at 2.5 nautical miles from Muka Head, Teluk Bahang here yesterday. comprising 51 men, 35 women and 40 children, had spent 25 days sailing from Myanmar to Malaysia.
http://www.nst.com.my/latest/126-famished-rohingya-refugees-rescued-from-leaky-boat-1.232213

27 Feb, Indonesia: 121 Rohingya, including six women and two children, were found adrift late Tuesday by fishermen around 25 kilometres (15 miles) from the village of Cot Trueng, on the northernmost tip of Sumatra island in Aceh province.
http://www.dvb.no/news/more-than-100-rohingya-rescued-off-indonesian-coast/26655

19 Feb, Srilanka: Survivors of a Burmese deathship, saved after two months adrift, have told of throwing 98 bodies overboard as their fellow companions perished. The 31 men and a boy who were rescued 463 kilometres from land by the Sri Lankan Navy said they originally set sail two months ago from northern Burma for Indonesia or Australia.
Instead, the suspected Rohingya found themselves languishing on the Indian Ocean, dying one by one of thirst or starvation or dehydration in a nightmare voyage.
http://phuketwan.com/tourism/horror-sea-bodies-thrown-overboard-boatpeople-perish-thirst-starvation-17607/

18 Feb, Malaysia: 140 Rohingya refugees starved for three days, before 35 of them, including children, were arrested in the jungle of the Penang National Park today.
http://www.nst.com.my/latest/140-rohingya-refugees-arrested-in-penang-national-park-1.220680?cache=03%3Fpage%3D0

3 Feb, Thailand: About 145 Rohingya boat people were found crammed inside a vessel without food or water for 48 hours off Mook island in Trang's Sikao district on Sunday.
http://www.ndphr.net/2013/02/145-rohingya-found-off-trang.html

24 Jan, Thailand: The 179 Rohingya taken into custody north of Phuket yesterday survived on four meals of uncooked rice in their 16 days at sea,
http://www.phuketgazette.net/phuket-news/Rohingya-Only-4-meals-in-16-days-at-sea/20045

16 Jan, Malaysia: Two boats carrying 354 men, women and children, who are supposedly from Burma, landed in Malaysia on Tuesday night, where local police rounded them up for being illegal immigrants, Malaysian newspaper The Star reports. The boats came from Bangladesh and Arakan State in Burma, and landed on Cenang Island in northwest Malaysia. "One of the boats had 143 passengers comprising 94 men, 18 women and 31 girls. The other had 211, comprising 207 men and four boys," a police officer said. Another 29 Burmese nationals were nabbed by police near the Thai-Malaysian border on Tuesday.

6 Jan, Thailand: A boat carrying about 70 asylum seekers from Myanmar's beleaguered Rohingya minority has been found adrift in the Andaman Sea off the Thai resort of Phuket
http://www.lasvegassun.com/news/2013/jan/06/as-thailand-rohingya/

2) 31 Dec, India:  The 128 Rohingyas, whose boat drifted into India's Andaman islands earlier this month, say they don't want to go back to Myanmar.
http://www.ndphr.net/2012/12/452-rohingya-refugees-detained-in.html

But Rohingya boatpeople didn't receive effective interference before Thai-navy pushed them back into international waters. Think here again how about those still remain in isolated islands.  The following report tell their plights;

In Jan 2011, three boats of Rohingya refugees landed over the weekend of January in Southern Thai-waters, were similarly pushed back into international waters. Despite PM Abhisit Vejjajiva had promised to hold investigation all those involved to account and or compensation for those lost of lives in relation to towing boat people total about 1116 Rohingya and some Bangladeshi during 2008.
A group 91 persons rescued near India-Andaman Island and another group 129 persons rescued near Indo-Acheh.
a) 29 April  2011, Rohingya detainees allege Thai abuse
http://www.dvb.no/news/rohingya-detainees-allege-thai-abuse/17162
(Around 91 Rohingya were reportedly rescued by the Indian Navy adrift in the Bay of Bengal, who alleged that they had been pushed out to sea on 19 Jan 2011 by the Thai Navy in a vessel with no engine and only 100 litres of water. 25 had to be admitted to hospital after their rescue.)

b) 16 Feb 2011, 129 boat people from Myanmar rescued off Indonesia's Aceh
http://www.thefreelibrary.com/129+boat+people+from+Myanmar+rescued+off+Indonesia's+Aceh.-a0249613900
( A total of 129 people, all men in their 20s except for a 13-year-old boy, were on the vessel found in waters about 200 kilometers east of the  the provincial capital Banda Aceh.)
More Boatpeople Sailing Past Phuket, say Reports
(a boatload of boys and men who sailed earlier this month was intercepted and ''helped on'' off the Thai island of Prayam in the border province of Ranong just yesterday, 22 Nov 2011.)
http://phuketwan.com/tourism/boatpeople-sailing-past-phuket-reports-15061/

total towed into intl waters: The first reported forced expulsion on 11 December 2008 resulted in approximately 580 Rohingya being cast out to sea. Over 230 of them are reportedly missing or dead.
The second forced expulsion involving over 400 persons took place in the same manner on 18 December 2008. This group was towed in a single barge and abandoned in international waters north of Thailand’s Koh Surin Island. Over 300 of this group are presumed missing or dead.


What happened to nearly 5000 Rohingya who were caught in Thai-waters during 2008. Did they receive intervention before Thai-navy pushed-back into international waters? The following reports tell their stories;
(a) 28 March 2008, 'Deathship' Burmese Muslims Forced Back to Border
http://phuketwan.com/tourism/deathship-burmese-muslims-forced-back-to-border/
(CONCERN IS mounting about the fate of a large group of Burmese Muslim boat people who have been arrested in Phang Nga and trucked back to the border with Burma.
The Muslims, numbering about 80, landed on Koh Kor Khao on Wednesday and later told a migration officer that there had been deaths on board.)

(b) 19 April 2008, Exile Island Plan: Two Hundred Burmese in Jail
http://phuketwan.com/tourism/exile-island-plan-two-hundred-burmese-in-jail/
(ABOUT 200 Burmese Muslims, known as Rohingya, are being held in jail by Immigration officials in Phang Nga, Phuketwan has learned.)

(c) 17 Dec 2008, 'Starving' Boatloads: Phuket Call for UN Action
http://phuketwan.com/tourism/starving-boatloads-phuket-call-action/
( Between December 5 and December 13 a total of 576 of the Rohingya, or Burmese Muslims, arrived in Thai waters in five boats, according to the spokesman.
The largest group of 210 were travelling on a single boat and were taken into custody on Surin island, roughly offshore from the border between the provinces of Ranong and Phang Nga, on Saturday.
Five navy vessels now on constant patrol apprehended the other four boatloads of Rohingya in the same region.
Once the boats come within Thai waters, 12 nautical miles off the coast, the Thai navy apprehends them. )

(d) 19 Dec 2008, Phuket Navy Holds Rohingya: Photo Special
http://phuketwan.com/tourism/photo-special-phuket-navy-holds-burmese-muslims/
(So far this year-2008, nearly 5000 Rohingya have been caught. Concerns are held for Thaiand's security because they have all been men.)
(The Navy has supplied Phuketwan with photographs of its December 13 interception and capture of a single boatload of 210 Burmese Muslim men.)

(e) 9 Jann 2009,  Exclusive: Secret Rohingya 'Exile Island' Revealed
(THAILAND'S Army is secretly detaining boat people on an ''exile island'' in the Andaman and periodically sending them off at sea in international waters in large numbers.)
http://phuketwan.com/tourism/rohingya-ranong-exile-island/

(f) 10 Jan 2009, Phuketwan Voyages to Secret Exile Island
http://phuketwan.com/tourism/phuketwan-voyage-secret-red-sand-island/
(On December 18, we have learned from reliable sources, a total of 412 unwanted Rohingya were taken out to international waters north of Surin island and left to their own devices...//...That December release brought to about 800 the number of Rohingya who have been turned back in this fashion since the Army became involved late last year, one informant told us.)


(g) 15 JAn 2009, Similans Tourists See Boat People Mistreated
http://phuketwan.com/tourism/similans-tourists-see-boat-people-mistreated/
(Thai officials have confirmed that the Thai Navy apprehended a group of 93 Rohingya boatpeople on December 23, and took them to the island of Koh Baed for processing. The Royal Thai Navy refused to comment immediately on the incident, saying that all questions had to be submitted in writing first.) 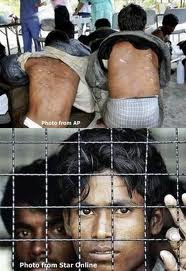 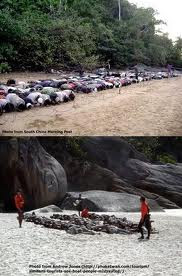 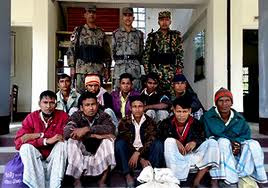 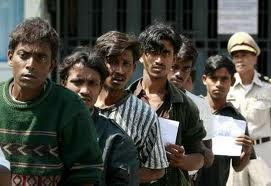 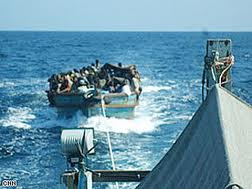 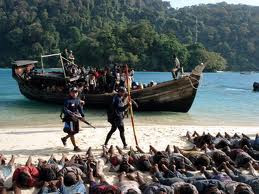 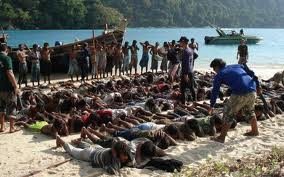