Confiscations, Destructions and Muslims Locations in Arakan Up to Year 2010


1. Sittwe/Akyab: Confiscations, Destructions and Muslims Locations Up to Year 2010

Akyab is one of the 3rd largest Muslim population after Maungdaw and Buthidaung. It reached to two third prior to and during British emperor and Rohingya dialect became a main language for social and commercial dealings. Presently, there are 72 muslim villages consisting Rohingya, Kaman and Rakhine muslims and the rest about 50 Rakhine villages. 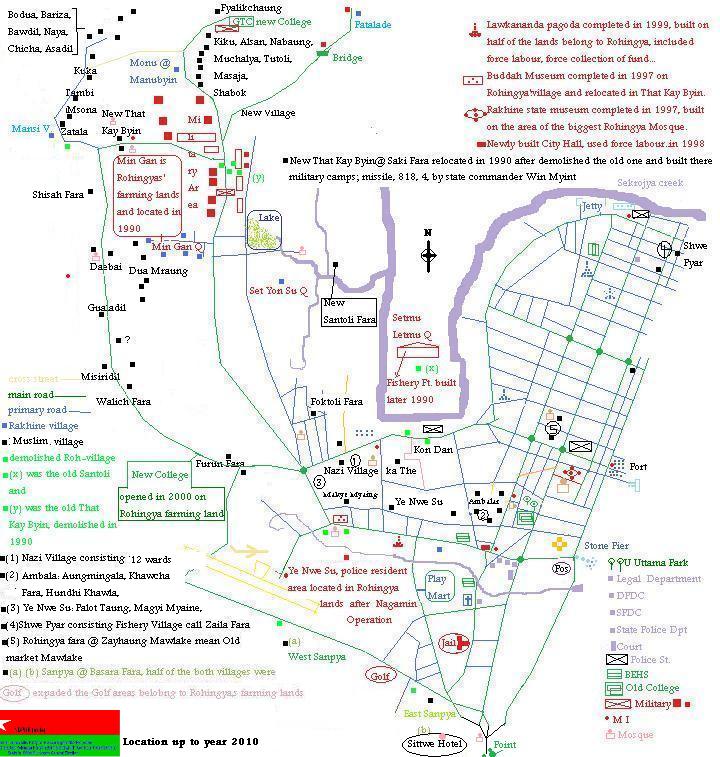 Apart from destructions and causalities in 1784, 1942, 1949 and 1978, list of confiscations & demolishings after  1978 are as follows;
1) Rohingyas who resided in the town, near by market areas and along Mawlake and Ambalar main roads were moved to farer places for various concerns including requirements such as zinc roofing, fence, taxes and other huge legal responsibilities.

2) The old Thatkaybyin (Sakki Fara) village demolished in 1990 when Win Myint promoted as a Rakhine state command-commander who later became the third secretary of Burma and died in an accident in Mawlamyine. The village was replaced by Military Missile Force, (818)-Military Camp, Military Communication Camp-(4) and Training Field.

3) The old Santole village was demolished in 1990 and relocated at the back side of Sittwe Lake (Kandawgyi). And fishery factories and stored ports  was replaced there and named as industrial park.

4) Some houses of Holtaung (Buhar fara), along the both sides of the Mayu road, were seized in the late 1990 and built there Buddhist Museum completed in 1997 and  Lawkananda Pagoda completed in 1999.

5) Half of the both West and East Sanpya (Baasara Fara) were relocated in new Thatkaybyin in 1990 including some farming lands seized for the Golf Mart expenditure.

7) The half land of the biggest central Mosque was seized and built the Cultural Museum completed in 1997.

9) The area of New College completed in 2000 was the lands of Bumay (Furang fara) village. And the new GTC college area was belong to the Fyalikchaung villagers. Most of the farming lands between Fyalikchaung Fara and Shabok Fara were seized for further.

10) In 2001 Feb 5, Four houses had been burnt down  in the riot between Rohingya and Rakhine in Aungmingala (Mole fara). The next day on 6 Feb 2001, about 22 houses along Nazi road side of Konden ward, were fired into ashes. Military had introduced Martial-law for both area before the riot but it did not stop aggression behaviors. And arrested about hundred of Rohingya youths including acting leaders. Those burnt down areas were seized and villagers were relocated in Santole and  New Thatkaybyin.

11)All of environmental creeks were seized since 1990 and used for military income and tender back to Rohingya in every year.

12) The area today built up there City Hall was seized during Nagamin Operation but the building was completed in 1998.

13) A shrine mosque Buddar Mukan (Bodumuhun), which was built in 1756 for the memory of Saint (Fakir) according to The Journal of the Royal Asiatic Society of Great Britain and Ireland © 1894 Royal Asiatic Society of Great Britain and Ireland.  ( http://www.jstor.org/pss/25197219 )
It is situated near by East Sanpya (East Basara Fara). The two rocks lap each other found in front of the shrine and two caves used for meditation by Saint. They were seized since 1978 but not demolished yet. But,  the farming lands near by there were Rohingyas and located Navy camp before 1990. Now, replaced military training school and the building is  locked in the compound. Muslims were  allowed to worship until 1990.

14) Another shrine Baziaraa mosque, tomb and pound are situated the southern part of Sittwe Lake (Kandawgyi) and muslim village near by it was Sanggana fara. According to Rohingya villager, this mosque was also built in a bit later time of Bandar Mokan. Despite the village and this mosque were seized in about 1985, muslims were allowed to pray until 1990. later it was locked and used as Military Camp. Authority also do not dare to destroy this mosque as it was built after that area appeared as a sign of the edge of Sittwe. 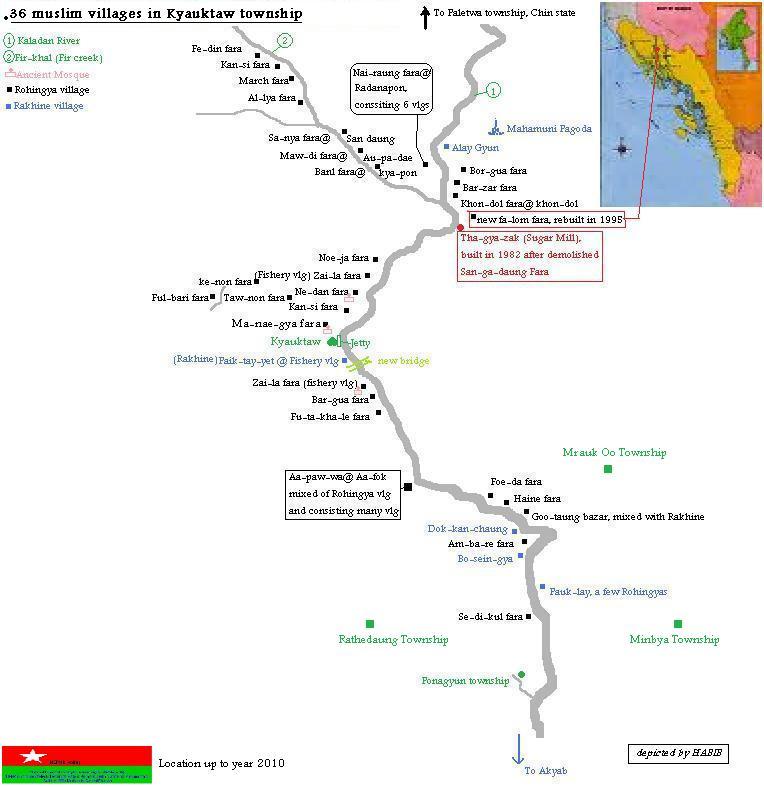 Distruction and Confiscation;
1) Manaegya fara (market area) in the main of the town,  muslim houses were reduced slowly by replacing Rakhines, monasteries, and expansion of market lots. The progress started since 1967. Now, no Muslim allow to hold shop unit in the market area, but some shops exist at the outside of the market area, even though the earlier business establishers were originally
muslim. Now, no more Rohingya remained in this main village.

2)Rungsu fara in Dok-kan-chaung Rakhine village and Borgua fara in Boseingya village with mixed of a few Hindhu residents, were replaced by Rakhines in 1967. And many farming lands in Dokkanchaung, Ambare, Boseingya were confiscated but retained later only half of the Ambare lands in about 1969-70 after one of the villager met with president general Saw Maung.

3) Sangadaung  village was demolished in 1976 and built there the Sugar Mill in 1982. The villagers were relocated in Falom fara. Again in 1995, both new settlers of Sangadaung and the villagers of Falom fara were forcefully moved to 7 miles farer area. But, all villagers came back and settled near by the edge of the old Falom-fara.

4) Kanpaw fara in Rakhine Paik-tay-yet was destructed to pave space for new bridge project but Rakhines are still allowed to stay. The villagers were relocated near by Futakhale fara where is a creek call Kanta Chaung.

5) Between 1992 and 2006, many irrigation farming lands both in table areas in; Falom fara, Khondol Barwa fara (Khaungdok Alay Kyuan), Bazar fara, Nai-raung fara (Radanapon) and beach side areas in Aapawa (Aa-fok), Foeyda fara, Haine fara, Guu-taung bazzar, Ambare fara, Boseingya fara, were confiscated for Sugar plant  plantations. The owner of animals got fine for their animals entering into these plantations and many animals were seized as well.

Mrauk Oo (formerly known as Mrohaung). There is another a small town call Minbya township situated opposite side of Mrauk Oo, was also counted Mrauk Oo territory. But at the present the sate Rakhine/Arakan is expended up to 20 towns from 17 towns. So, Minbya is considered as separate town.

( yet to be located)


Destruction and Confiscation of other Ancient Mosques;
3) In 1993, Aung Daine village and Nyung Pin Zay village near by jetty, only Rohingya houses from Shit Taung including Shwedah Qazi Mosque, were demolished and relocated at Kwan Lon (Kha-wa-lon @ Mandarabyin) village. And the places were replaced with  Electric Station and house lots for military

4) In the middle of 1994, Aa-Lae-Zay @ Shwe Gu Daung village including Nan Oo Mosque, Kwan Lon (Kha-wa-lon @ Mandarabyin) plus Sandhi Khan Mosque, Ponna Mraung village, were demolished by Military forces-540.
The villagers about 10,000 Rohingyas were forcefully lifted to Maungdaw town. Some Kwan Lon villagers who escaped had tried to resettle in own village by rebuilding temporary tents, were also lifted to Maungdaw town.
The villagers' lands were replaced with Military Forces-540, Military Forces-377 and Environmental Projects.

5) Maung Tha Gon (Rwa Handaa Fara) village including Musa Pali Mosque were demolished in about 1983. The villagers were relocated to Kan Paw village and their lands were replaced with model village of Rakhines and military purposes.

6) Farming lands of Paung Do (Fun-du-Kol) villagers were seized and replaced with Military Forces-378 but the village was not demolished up to year 2010.

4) stone structure Sandhikhan mosque built in 1433 by Muslim army Sandhikhan of Bengal who came to help enthrone king Narameikhla(The founder of Mrauk-U dynasty), in Kwan Lon (Kha-wa-lon @ Mandarabyin) village of Mrauk Oo, was demolished in 1994. The stone blocks and teaks beside the mosque were forcefully carried by Rohingya carts and used in expansion of  Buddhist monastery of Shwe Taung village.

4) Nan Oo Mosque and Nantha Tank with stone embankment, in Aa-Lae-Zay(Shwe Gu Taung) village, near by hospital and palace office, was demolished in 1994 but Nantha pound(tank) still exists.