Bangladesh has said the international community, particularly the United Nations Security Council, cannot avoid its responsibility for a sustainable solution of the Rohingya crisis through voluntary, safe and dignified return of the Rohingyas to their place of origin and bringing the perpetrators to justice. 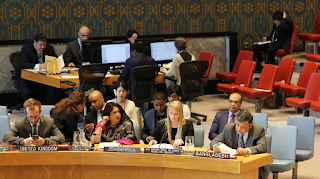 Mentioning that the culture of impunity as experienced by the world in the case of Rohingya crisis-related sexual violence in Myanmar, the UN ambassador said, "Without bringing an end to it, justice cannot be full. In such cases, ensuring accountability and justice is a must to create confidence and incentivize repatriation which we do not see happening".

In this context, Ambassador Masud asked the Council: "Would you expect these Rohingyas particularly the women and girls who have been subject to unspeakable sexual violence to be willing to return without any guarantee that the same fate would not befall upon them?"

He recalled the horrific experience during Bangladesh's Liberation War in 1971 when the women of Bangladesh had gone through widespread and systematic sexual violence and abuse as a tactic of war.

In this connection he said, "That has come back with the Rohingya humanitarian crisis. According to 'Save the Children', in 2018 alone, an estimated 4,000 Rohingya babies were born in the camps, many of whom are unwanted even by their mothers, as we can all imagine, why? Their recognition, compensation, and ensuring for them a better future in their country of origin is something international community should take a hard look at".

Highlighting Prime Minister Sheikh Hasina's 'zero tolerance' policy on sexual exploitation and abuse, he said, "In Bangladesh, as a top troops/police contributing country, we have ensured raising awareness raising and pre-deployment training for all our peacekeepers. We have also implemented guidelines by our Supreme Court by establishing women-only committees in workplaces to hear complaints against discrimination and sexual violence against women and girls".

"Our authorities are going ahead with the National Plan of Action on women, peace and security with the help of UN Women". Ambassador Masud also enumerated Bangladesh's initiatives to prevent sexual violence such as, strengthening national laws and investigation mechanisms, providing protection to victims, ensuring victims' rights for sexual and reproductive healthcare and reparation and capacity building at local and national levels".

The open debate focused on the importance of accountability, and also addressed survivor-centred approaches to addressing sexual violence in conflict settings.

The crisis of Rohingya is as a point of fact for life and death of a million of those Rohingya refugees taking shelter in Bangladesh and the remaining Rohingyas and Kamans numbering between 350,000 and 500,000 including about 150,000 who have been systematically trapped in ghetto types of camps across Arakan (Rakhine) state and still facing frequent attacks, deadly starvation from June 2012.

The solution to this crisis is yet to be paved and directed with mandated concrete actions, regardless of various attempts of exploitation by China and military powered criminal government of Burma (Myanmar).

We acknowledge the difficulties faced by the government of Bangladesh and our gratitude ever with the people and government of Bangladesh.  Since the case of  Rohingya refugees are being a heavy burden for Bangladesh for years, the country has full right to act on behalf of them and deliver justice in the bast manner. However, failure of finding solution or action should not be the fact to compel the Rohingya refugees for repatriation without dignity. Beside certain safety concerns, the current program of relocation of just a small number of Rohingyas into 'BaShanShar'and/or  current suggestion of  possible just a banner of safe zone  in similar situation, are not part of solution either when the core solution rely within Burma.

The military powered Suu Kyi government has been repeatedly boasting about signing of Repatriation Deal, MoU, and misclaiming of  her government has materialized the 86 of 88 recommandation of Annan Commission and collecting huge amount of foreign funds in the name of stabilization in Arakan state. In deed, her government has taken no progress at all to cease ongoing attacks on the ground, nor safe return of Rohingya refugees with guarantee of relocation at origin villages, citizenship rights and lifting all forms of restrictions and oppressions.

The matters also relate to question that- for how long and who will look after continuously for a million of these Rohingya people if we keep the crisis alive?

As you aware, the case of achieving of justice in Myanmar is not just for the past but also for future  since the rejection of Rohingya been a common cause jointly by monks, nationalists and majority public. The neutralization of the criminal government authorities from top to bottom could only happen by prosecution of all of those responsible and/or address the root causes to end the cycle of violences and attacks against Rohingya and other minorities. We are still witnessing the ongoing  vigilante attacks, blockages and segregation against Rohingya and other muslims across Arakan state and central Burma .

It is therefore the ending of ongoing genocide of Rohingya in Burma and all form of violences and relocation of these a million of vulnerable Rohingya refugees with dignity and safety, will never happen unless mandated concrete actions taken by international communities throughout a global political commitment of R2P resolution and humanitarian intervention and creation of a protected safe zone, and are also in fact only viable options since' security, safety, existence and welfare' have been fallen into heavily risk and national authorities manifestly reluctant to protect, as well as the state has been sponsoring genocide, war crimes, ethnic cleansing and crimes against humanity.