The genocidal attacks against unarmed defenseless Rohingya civilians have been resumed in Arakan from 8 June 2012. The military government that has quietened the 60 millions population for five decades, wisely pretends to be uncontrollable the situation while local media are still trying to neglect the ongoing violences by repeating a fabricated murder case of individual.

The list of Causalities and Destructions of Arakan is described as below in order to compare with the quasi-government's latest report that fancily balanced up by putting at- "the number of casualties on both sides at 77 dead and 109 injured, 4,822 houses, 17 mosques, 15 monasteries and three schools were destroyed, some 14,328 Arakanese Buddhists and 30,740 Rohingya Muslims have been affected and are currently living in 89 temporary camps".

In reality for {8 June to 20 Oct 2012}, the death toll is more than (10,000) people, burned and destructed about (16,000) houses plus (57) mosques from (70) muslim villages across (8) different towns of Arakan state. While the number of injuries, rapes, looting, arbitrary abuses is uncountable. About 90,000 homeless Rohingyas in Sittwe/Akyab alone but less than half of them have been listed in five refugee camps and receiving very poor assistance.
The rest about 50,000 shelter-less mulsim victims comprising Rohingyas, Kaman and Rakhine muslims in Maungdaw, Rathedaung, Kyauktaw, Pauktaw, Rambre, Myebon and Ponnagyuan towns are still compelled to die with starvation. And no aid group has visited from the beginning. As well as, Arakanese muslims in all over Arakan state are also facing food shortage from the beginning as a result of the government still impose confinement on them.

The displaced number of Rakhines is less than 500 people from burnt down houses about 50 of Mingan village of Sittwe town and less than 1000 people from about 100 houses total of Maungdaw township.


It is very sad to know all reports have still poor calculation. Let say only about Sittwe town where about 90,000 displaced. Were they lived 22 persons per house as every report mentioned about 4,000 houses burnt down there? And how about 50,000 other displaced in 7 different towns- Maungdaw, Rathedaung, Kyauktaw, Pauktaw, Rambre, Myebon and Ponnagyuan and how many thousand houses were destructed in these regions?

Addionally, From 20 Oct 2012, vigillant attacks by Rakhine people caused- about (6,000) houses plus at least (35) mosques were burnt down and about (1,000) people including about 20 Rakhines were also died in six different towns- Minbya, Mrauk U, Kyaukpyu, Myebon, Pauktaw and Rambre towns of Southern Arakan state. The dead bodies of 178 those found in Mrauk U town were buried in the graveyard of Yainetay (Zula Fara) village.. {However, we have not yet added these total destrcution and death tool into the below list.}
-------------------------

{List for 8 June to 20 Oct 2012}
The following numbers in the charts are based on daily contact in Arakan, more then 40 individual testimonies and a network of a dozen underground Rohingyan activists, reporting at the risk of losing their lives. Those reports have been compiled by a network of Rohingyas organizations based in exile and in direct contact with the Rohingyas who are currently trapped in a state where they are hostage and killed, without international community having access.

This report is based on their voices... 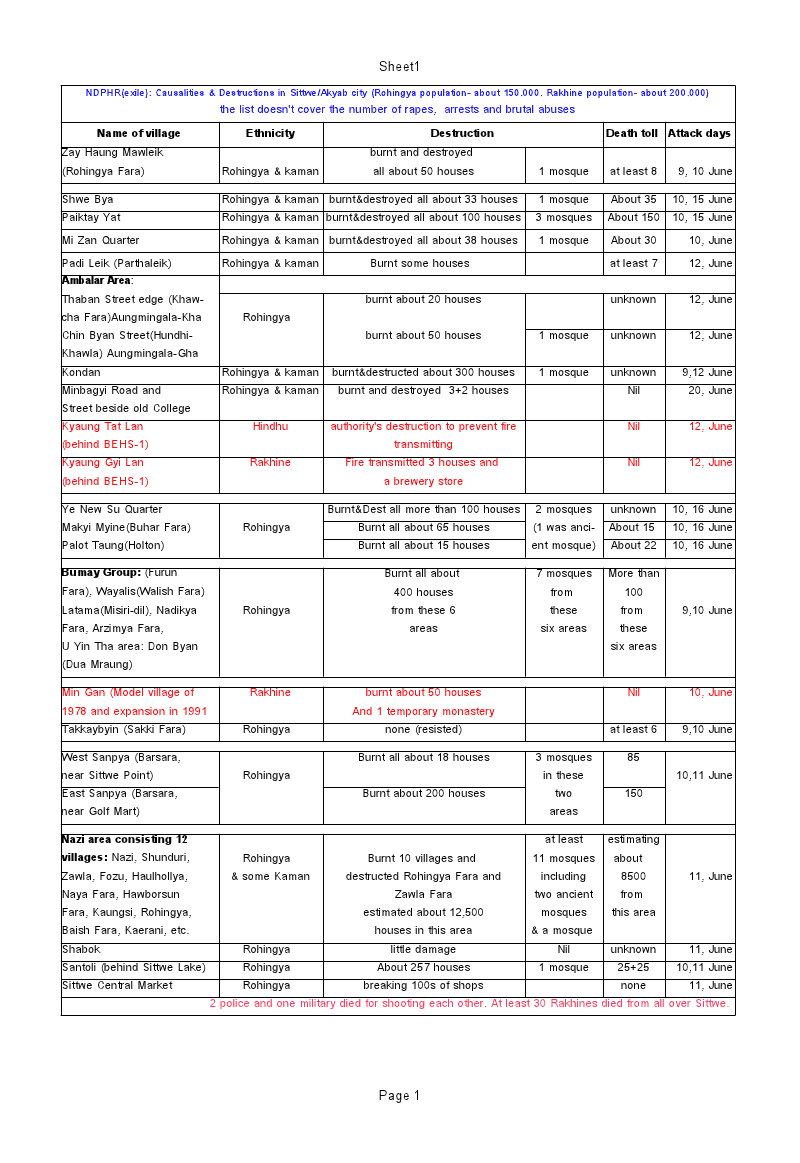 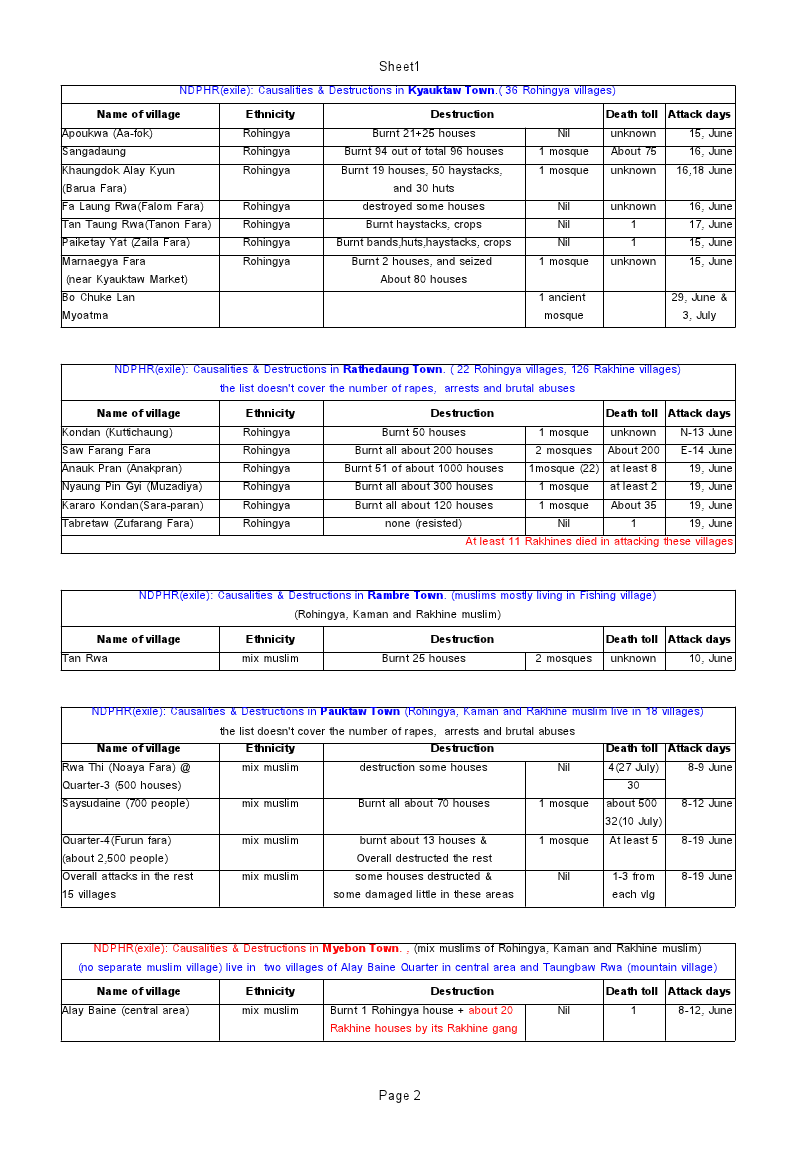 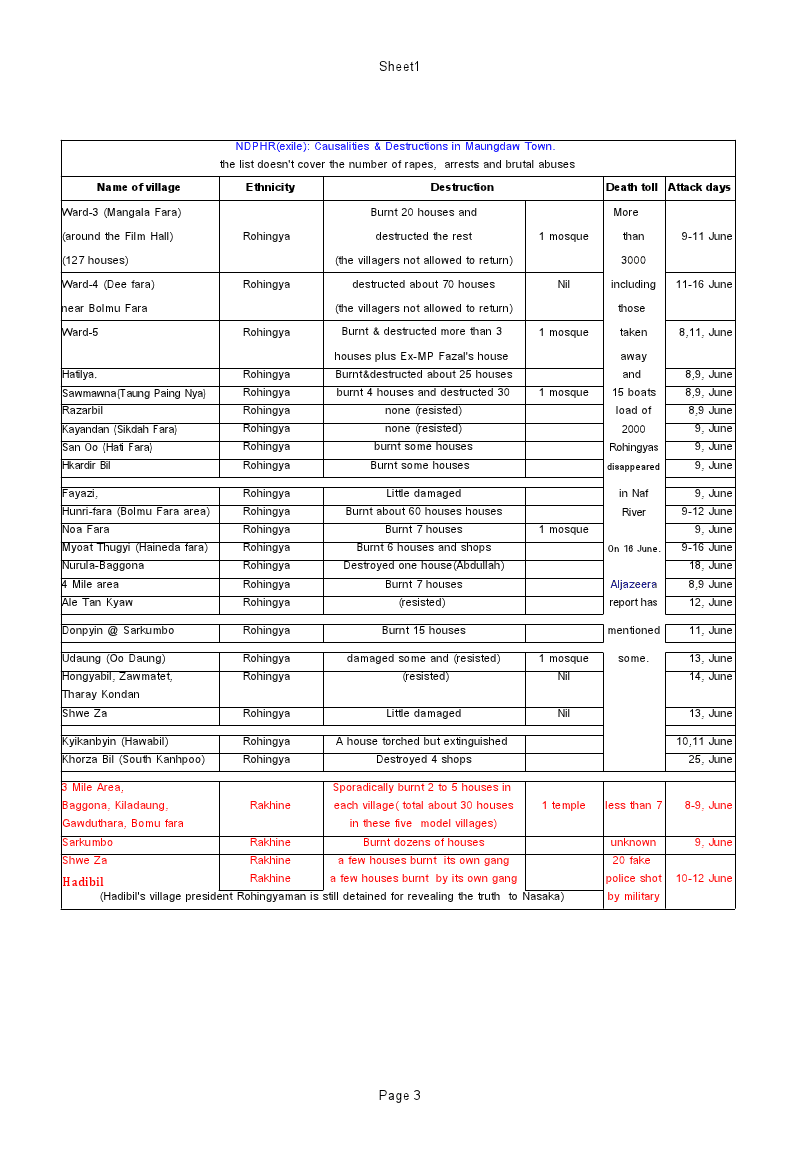 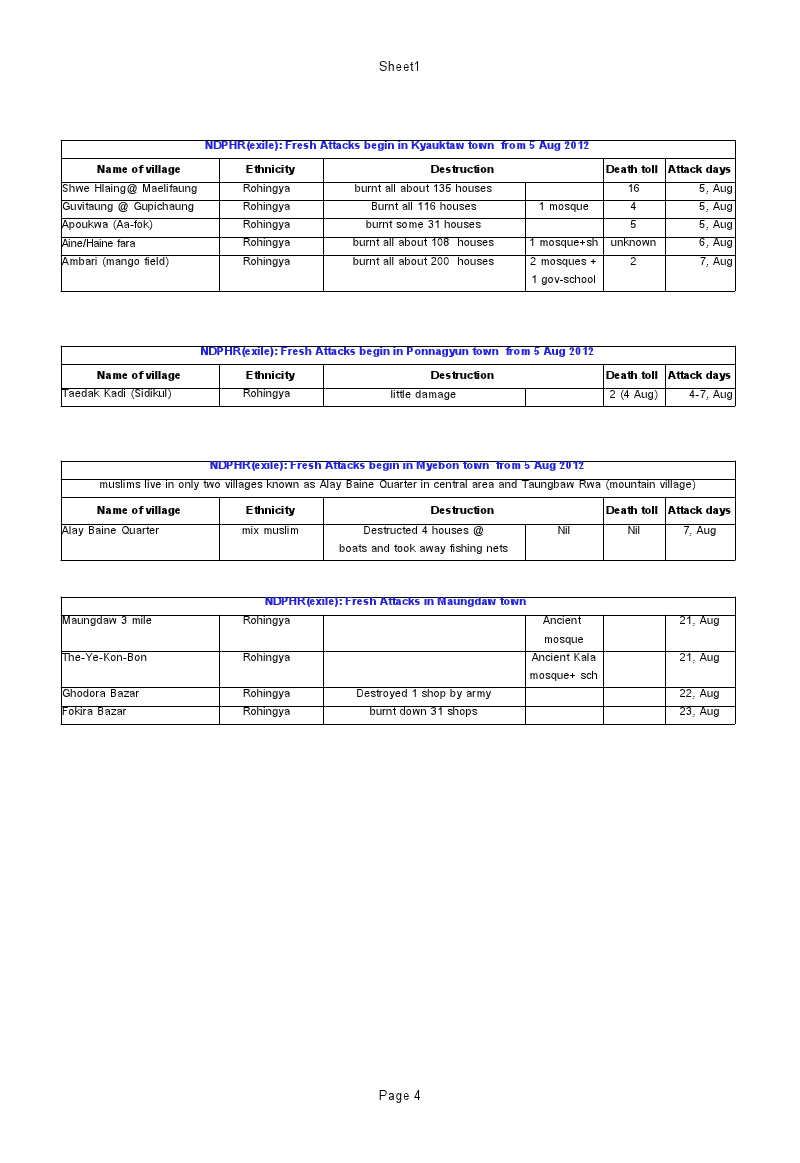 Report of Some Escalated Cases from Maungdaw town of Arakan
Prepared for
Representative of O.I.C Visitors in Rakhine State
1) (Escalated a few number of death about 50 persons from Maungdaw are listed in page 21-24)

Click to see the list of more than 80 Rohingya women and under-aged girls from Baggona village of Maungdaw alone, raped by military, Rakhine terrorists, police and security forces.