Source theguardian, 26 Aug
Inquiries were held on the mass killings in Rakhine state and some visa bans imposed; here's what must happen next 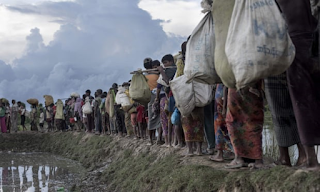 The mass exodus of Rohingya refugees from Myanmar into Bangladesh in October 2017. Photograph: Fred Dufour/AFP/Getty Images
A fter the genocides in Rwanda and Srebrenica, the words "never again" were uttered like a mantra by many in the international community. Yet a year ago in Myanmar's Rakhine state, "never again" happened all over again.
On 25 August 2017, the army unleashed a military offensive that forced more than 700,000 Rohingya to flee their villages into neighbouring Bangladesh. It is believed that thousands were killed. Human rights organisations have reported mass rape and eyewitness accounts describe babies and children snatched from their parents' arms and thrown into burning homes or drowned in rivers. Families were burned alive in their homes, villagers lined up and shot and civilians targeted indiscriminately. Zeid Ra'ad al Hussein, the outgoing United Nations high commissioner for human rights, described what happened as "a textbook example of ethnic cleansing", and the UN special rapporteur on human rights in Myanmar, Yanghee Lee, said she saw "the hallmarks of genocide".
Within the next few weeks, two significant reports will be published. The United States is expected to release the results of its investigation, which may conclude that what has occurred is genocide. The UN fact-finding mission, established before the offensive began last year, will present its report and may well recommend mechanisms for accountability. The evidence and recommendations of these reports must receive serious attention – it is essential that the international community summons the political will to act. This coming week, the UN security council will discuss the situation again, as it has done on several occasions already. Such discussions are vital, but they must move from talk to action.
And yet of course the crisis did not begin a year ago. The plight of the Rohingya has been severe for decades. This predominantly Muslim population has been subjected to dehumanisation and marginalisation, stripped of citizenship rights, rendered stateless and facing restrictions on movement, marriage, access to education and healthcare and freedom of religion or belief.
In 2012, violence broke out between Rakhine Buddhists and Rohingya Muslims, leaving thousands displaced and parts of the state smouldering. Rohingya were held in dire conditions in camps that observers compare to internment centres. A new campaign by the Myanmar military broke out in October 2016, a prelude to last year's dramatic escalation.
What, then, should be done? The European Union, the US and Canada have imposed visa bans on a few military and security personnel, which is a welcome step, and Washington has recently strengthened some sanctions against some individuals, although not yet the man ultimately responsible, the commander-in-chief, Min Aung Hlaing. But there is no global arms embargo, no targeted sanctions against military-owned enterprises and no action to end impunity by referring the perpetrators of crimes against humanity to the international criminal court. These are steps that the UN and its member states should now adopt. 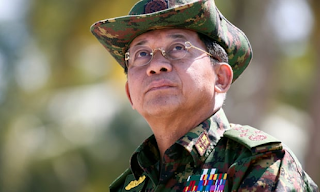 No steps have been taken against Myanmar's commander-in-chief, Senior General Min Aung Hlaing. Photograph: Lynn Bo Bo/Pool/Reuters
Ending impunity is essential because history shows that if those who perpetrate crimes against humanity get away with it, they or others will take it as a signal that they can repeat the same crimes. We warned of this 18 months ago.
But we must also consider what else can be done in addition to justice and accountability. Myanmar has been torn apart by decades of ethnic conflict, fuelled in recent years by religious intolerance and hatred. Constructive steps towards long-term peace-building and reconciliation are needed, to counter the voices of intolerance and promote the principle of freedom of religion or belief, based on respect for human dignity, for every person of every race in Myanmar. Narratives need to be challenged, hate speech countered, the citizenship rights of the Rohingya respected, voices of peace within all religions strengthened and a genuine peace process and political dialogue enhanced.
Perhaps there is a role for trusted international mediators whose only agenda is the basic dignity of all. Pope Francis visited the country last year and delivered this message – perhaps his good offices could play a role in bringing the different peoples of Myanmar, of different races and religions, including the Rohingya, together in dialogue. For one thing is absolutely certain: if hatred, deeply entrenched in society but manipulated by Myanmar's still powerful military, is not addressed, we will be lamenting "again and again" our failure to live up to our responsibility to protect.
Jan Figel is the European Union's special envoy for freedom of religion or belief outside the EU
Benedict Rogers is East Asia team leader at the human rights organisation CSW
Posted by NDPHR at 8/27/2018 09:34:00 am