Rohingyas to be repatriated beginning next year, says Saifuddin 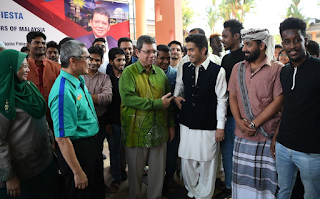 Foreign Minister Datuk Saifuddin Abdullah (centre) meeting with Universiti Malaysia Pahang (UMP) students and staff at UMP Gambang Astaka Hall, Kuantan, October 22, 2018. — Bernama pic
KUANTAN, Oct 22 — The repatriation of the Rohingya ethnic community to Rakhine, Myanmar is likely to be implemented by next year, Foreign Minister Datuk Saifuddin Abdullah said.
He said efforts to help the community return to their homeland were initiated by the Asean Foreign Ministers' Special Taskforce led by Singapore's Foreign Minister Vivian Balakrishnan.
"This special task force will go to Myanmar at the end of this month to discuss the quickest way to help the Rohingya community return to theirs.
"We do not know how fast this process can be implemented, but it should be initiated, for as ong as it does not start, the problem involving the Rohingya refugees will persist.
"It is important for us to help these people return to their home country, as otherwise, it would be condoning the 'ethnic cleansing' which is currently happening," he told a press conference after opening the Kuantan District Malay Language Teachers Professionalism Enhancement Workshop at the Pahang State Library Corporation here, today.
Saifuddin, who is also Indera Mahkota MP, said among the actions expected to be implemented by the special task force was to set up a monitoring team to ensure the safety of the Rohingya community in Myanmar.
He said the existence of the team was important as the Rohingya people feared to return due to the oppression.
Security risks have also left about one million Rohingyas stranded in Bangladesh, where the Malaysian Government has also assisted through the setting up of field hospitals in the Cox's Bazar Region.
"While the Rohingyas in Malaysia have been helped in terms of their children's education, without involving government funds, as it is being implemented through of non-governmental organisations (NGOs).
"So far there have been six NGOs who have set up child education centres for Rohingyas, relying on their own funding or international donations such as from the Qatar Foundation, which helps in the sponsorship of welfare and education," he said.
Saifuddin also informed that the Human Resources Ministry had also tried to help the Rohingya community, however, the pilot programme involving 300 people was unsuccessful.
"Maybe the job provided was not appropriate or the method used... so the ministry involved is looking for a way to help them get jobs," he said.
He added that Malaysia will continue to urge for those involved, including several high-ranking Myanmar military officials to be held accountable for the Rohingya crisis.
Defence Minister Mohamad Sabu yesterday said there were over 100,000 Rohingya refugees in Malaysia, and not all of them were registered with the United Nations High Commissioner for Refugees (UNHCR). — Bernama
Posted by NDPHR at 10/26/2018 10:39:00 am