How the UN has failed the Rohingya 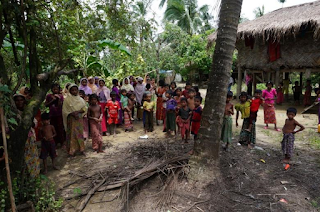 Rohingya villagers in Maung Hna Ma, Buthidaung township, northern Rakhine state. (Reuters)
The fundamental purpose of the UN is to uphold and promote human rights for all human beings on the planet. Yet, time and time again, the institutions of the UN have failed to prevent even foreseeable humanitarian crises, while parts of the UN work from within to undermine the mandate of the General Secretariat for the parochial national interests of the most powerful states on Earth.

A newly released independent report, headed by former Guatemalan Foreign Minister Gert Rosenthal, concludes, in the maddeningly diplomatic jargon of the institutions, that the UN System overall has been "relatively impotent to effectively work with the authorities of Myanmar, to reverse the negative trends in the areas of human rights, and consolidate the positive trends in other areas." This translates into English as: The UN has allowed Myanmar to execute genocide against the Rohingya of Rakhine state.

How? The first culprit, as always, has been the UN's Security Council, where Russia and China predictably vetoed an otherwise very strong and unusually popular resolution to censure Myanmar for the human rights abuses in the country, particularly those against the Rohingya. Russia is in a pattern of undermining everything that can be seen as a "Western" initiative, wherever it can, on the basis that doing so undermines American capacity to project power globally. China, meanwhile, is currently building a channel of its Belt and Road Initiative through Myanmar, and it increasingly looks to Myanmar as a client state in its sphere of influence — where, naturally, it does not wish to see any "Western meddling."

But even the apolitical institutions of the UN System itself have found themselves at odds with the UN's overall mission. The UN System is made up of a sprawling array of different subgroups, with different remits, different specific missions and few, if any, formal channels of communication through which to coordinate a common response to events or crises on the ground.

This is especially clearly demonstrated in the Rohingya crisis, where the groups working on human rights monitoring — like, for example, the UN High Commissioner for Refugees — have done a broadly good job of identifying the problems on the ground and warning the rest of the UN of the impending humanitarian disaster, even before it started to unfold in earnest. The patterns of state violence and systematic exclusion that are almost always reliable predictors of genocide had been observed against the Rohingya in Myanmar for decades, and they had been understood as incontrovertible and urgent since at least 2012, a full five years before the "clearing operations" carried out by the armed forces of Myanmar in Rakhine state started in August 2017.

The political paralysis at the top of the UN dictates that there should be institutional paralysis below.

But, while the humanitarian agencies were raising the alarm, the UN resident coordinator in Myanmar from 2014 until late into 2017, Renata Lok-Dessallien, was merrily focusingon building "positive" relationships between the UN and other Western parties, with complete disregard for the unfolding humanitarian violations, and with little concern even for Myanmar's continued stonewalling of other UN efforts to monitor and respond to the developing humanitarian crisis.

The problem, however, is that it would not even be entirely fair to lay the blame for all that has happened in Myanmar on one problematic country mission coordinator. For the country missions often have the same pattern of behavior, not just in Myanmar, but in many other problematic countries. It is not all that uncommon for these country missions to focus more on reconstruction contracts for international companies after some kind of disaster has happened, rather than to focus on preventing these kinds of disasters in the first place.

In the wake of the Rohingya genocide, the UN cannot even protest that such disasters should "never again" be allowed to happen. Even after their failures in Rwanda and Bosnia, that promise seemed doubtful. But now, the institutional impotence of the UN System is laid completely bare. And, while I hope the humanitarian groups within the UN continue their work, let no one be under the illusion that their work will have any bearing on the outcomes for the world's most oppressed peoples — certainly not so long as the broken Security Council has anything to say about it.