UN publishes database of companies profiting off human rights abuses – not on Israel, but Myanmar

In March 2016 the United Nations Human Rights Council mandated a database of companies profiting from Israel's settlements. Originally due in 2017, its publication remains in limbo as the release was delayed several times.  Conversely, a similar database on Myanmar was ordered in September 2018 and completed a year later.

During the last session of the HRC in September the 110-page report "The economic interests of the Myanmar military" was released. It was researched and written by an independent international fact-finding mission to Myanmar. The document follows a September 2018 report on human rights violations and abuses by the Myanmar military, commissioned by the HRC in 2017.

The new report lays bare the "business model" or economic infrastructure that enables the Myanmar military to commit human rights violations and abuses. It contains a practical 40-page database, listing all companies fostering direct and indirect business ties with the military. Companies involved in this model – mostly Asian, also European, some others – are named in full; their activities and ties to the military are described in detail. Incidentally, two Israeli firms are mentioned.

[See page 70 and further. The international section starts on page 96. Two Israeli companies are mentioned on page 107 for deals in October 2016 and April 2017.]

The thorough report shows what can be achieved in just one year. Even more important, no protests against it were heard.

Not discussed during the September session was the database of companies conducting business or profiting off of Israel's occupation of the Palestinian territory, East Jerusalem and the Golan Heights. The HRC had tasked compilation of the database with the UN Office of the High Commissioner for Human Rights (OHCHR). In January 2018 OHCHR announced it compiled a list of 206 companies, but its publication was stalled for "further research and consideration." OHCHR said at the time that it wanted to contact all of the companies before releasing their names.

Since then 22 months have passed. Pressed to explain yet another delay in March 2019, the High Commissioner, former Chilean president Michelle Bachelet, promised to transmit the database to the HRC in the coming months. In other words: in time for the HRC September session. Early September 103 organizations called for its publication, as others already did two years earlier. But Bachelet didn't deliver.

Early October a coalition including Human Rights Watch, Amnesty International and Al-Haq published a joined statement on the unexplained delay, mentioning "consistent reports of political interference by some states," concluding that March 2020 is now the earliest moment for consideration by the HRC – four years after commissioning it.

The delay is even more significant as the database builds on the conclusions of a fact-finding mission to investigate the implications of the Israeli settlements on the human rights of the Palestinian people. The mission found on February 7, 2013, that "business enterprises have, directly and indirectly, enabled, facilitated and profited from the construction and growth of the settlements." That's almost seven years ago.

Moreover, neither Myanmar nor Israel are the only instances where the UN ordered one of its agencies to produce a catalog of companies profiting from violations of international law. 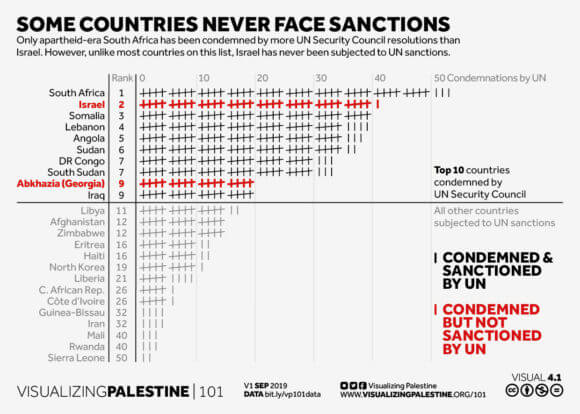 This visual highlights the fact that in spite of Israel being one of the countries most regularly condemned by the UN Security Council for violations of international law, it has never faced formal sanctions. (Graph: Visualizing Palestine)

In October 2002, a year before the end of the Second Congo War, the UN Security Council published a database of companies involved in "illegal exploitation of natural resources and other forms of wealth of the Democratic Republic of the Congo." The database contains 114 companies and 54 individuals and targeted not just the DRC, but also foreign powers holding territory inside the country during the hostilities.

Returning to Israel, the delay of the database fits into wider practices, most prominently the unexplained delay of an official investigation into possible Israeli war crimes by the International Criminal Court, or the ICC. Next January will mark five years since a preliminary investigation began. It should have led to a conclusion a long time ago but is just dragging on without an end in sight.

The stalling is similar to the ICC chief prosecutor Fatou Bensouda's decision to not investigate alleged war crimes in 2010 when Israeli commandos boarded the Mavi Marmara, bound for Gaza, while still in international waters and killing ten passengers during the raid. An activist who was aboard the ship during that attack has accused Bensouda of succumbing to "intervention," "threats," and "pressure" from the U.S., Israel, and an American pro-Israel legal firm.

Bensouda buried the case at the time but it is now being challenged in an appeal. The affair is the subject of a new book by Norman Finkelstein, titled "I Accuse!," which addresses Bensouda's dealings and the harm she inflicts on the credibility of the ICC.

In more recent years the UN-organization ESCWA was forced to withdraw its authoritative report on Israeli apartheid two days after publication – after accusing Israel of practicing "apartheid" in March 2017. The fact that even UN Secretary-General Guterres got involved in ditching the report – thereby harming a prominent member of his own UN-family and causing the resignation of expert UN-officials – hints at the amount of pressure that was applied on the UN.

Against this background it's worth remembering the words of Haaretz journalist Barak Ravid, who wrote in September 2017, the U.S. had engaged in "massive pressure" to change the wording of the HRC's resolution calling for a database of companies profiting off of Israel's occupation. He noted there was "Even an attempt by the EU to reach a deal with the Palestinians to drop the clause from the resolution stipulating the blacklist's formulation, in return for the support of European nations for the rest of its articles."

BREAKING ON @news10: After strong pressure by U.S. & Israel the UN postpones indefinitely the publication of a "Blacklist" of foreign & Israeli companies which operate in the settlements in the West bank & East Jerusalem

102 people are talking about this

Israel's staunchest defenders claim that Israel is being singled out – and that is correct. Israel and American officials often angrily point to the high number of Security Council-resolutions condemning its violations of international law – only Apartheid South-Africa scored higher –, but what really stands out is its ability to violate them all without ever being sanctioned. No other country enjoyed such indulgence.

The net result is that Israel can behave as it pleases, shielded at the highest levels, for which the Palestinians pay the price. The institutions that are supposed to guard their rights and lives have become institutional in their oppression.

With official channels blocked it's now up to the international community to demand justice for the Palestinians. And that's exactly what's happening. A grassroots coalition of some 60 organizations from 14 countries is planning a demonstration at the ICC-offices in The Hague on Friday, November 29 – the International Day of Solidarity with the Palestinian People. The coalition wants Bensouda to act, holding Israel accountable for its crimes against the Palestinians without further delay.

It's hard to think of a more symbolic place and date for a massive outcry demanding justice for Palestine. Organizations and citizens wishing to endorse or join the protest can do so by contacting the coalition (France, other countries).