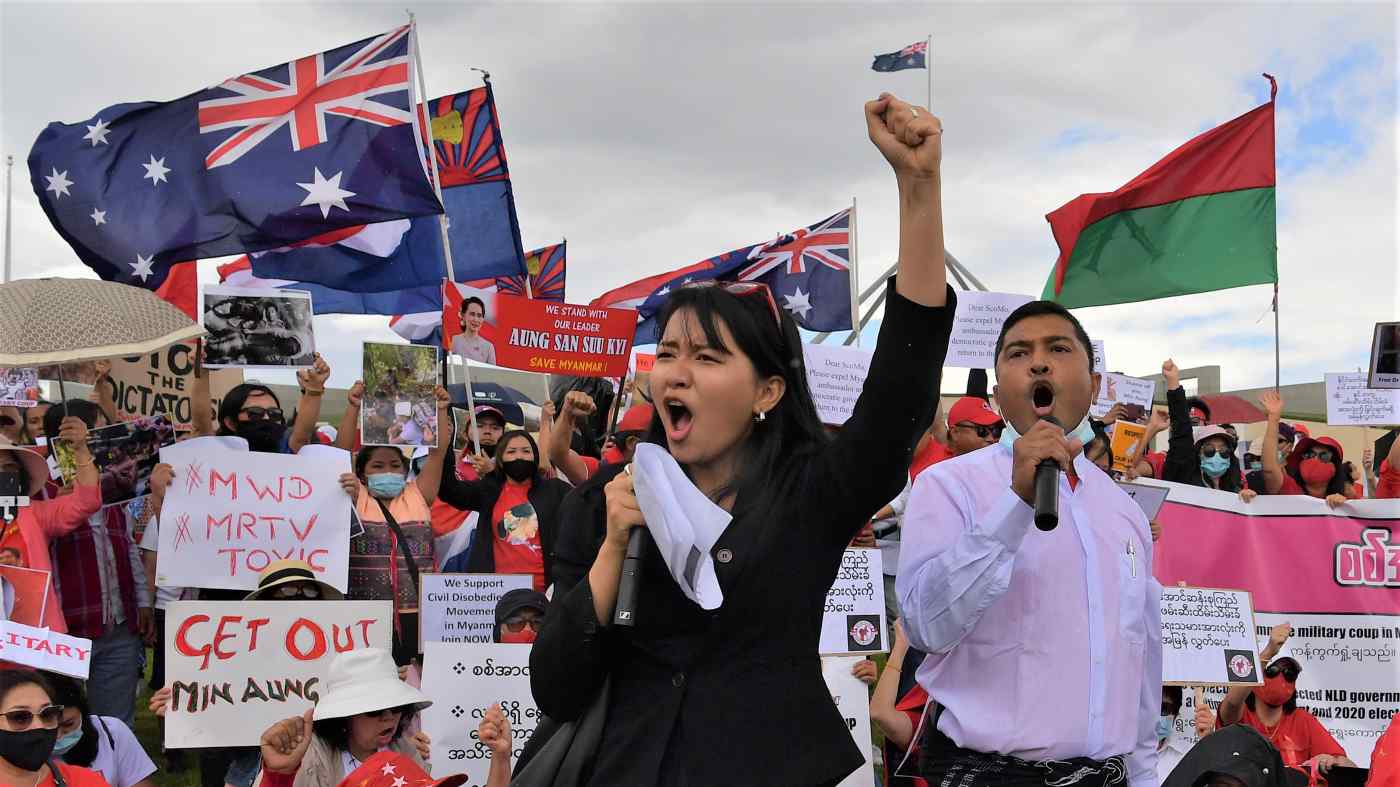 SYDNEY -- "Shameful," "crazy," "unconscionable" -- Australia's government is coming under heavy criticism from experts, activists and opposition politicians for what they see as its tepid response to the violence in Myanmar.

The U.S., U.K., Canada and the European Union have imposed sanctions against 38 senior Myanmar military figures since Aung San Suu Kyi's elected government was ousted on Feb. 1. Seventeen businesses with ties to the military have also been sanctioned, including the conglomerate Myanma Economic Holdings Ltd. (MEHL).

Australia, by contrast, has imposed no fresh sanctions in the four months since the takeover, and some describe its lack of action against military leader Min Aung Hlaing as particularly baffling.

Canberra did halt its defense cooperation program with Myanmar. It also diverted development assistance to partners such as the United Nations World Food Program, in order to prevent funds from going to the regime. Long-standing restrictions on exports of military equipment remain in place, as do sanctions and travel bans on five military officers, imposed in 2018 after a United Nations fact-finding mission documented acts of genocide against Myanmar's Rohingya Muslims.

But a member of the fact-finding mission, international human rights lawyer Chris Sidoti, told Nikkei Asia he was surprised by the choices the Australian government made on sanctions in the first place.

He suspects that in the case of the Rohingya, neither Min Aung Hlaing nor his deputy, Soe Win, were sanctioned because Australia wanted to maintain a line of communication to the top levels of the military.

"They thought they were sending a sufficient signal [by imposing sanctions on others]. But events since then demonstrate that it was not based on any real understanding or analysis of what is happening," Sidoti said. 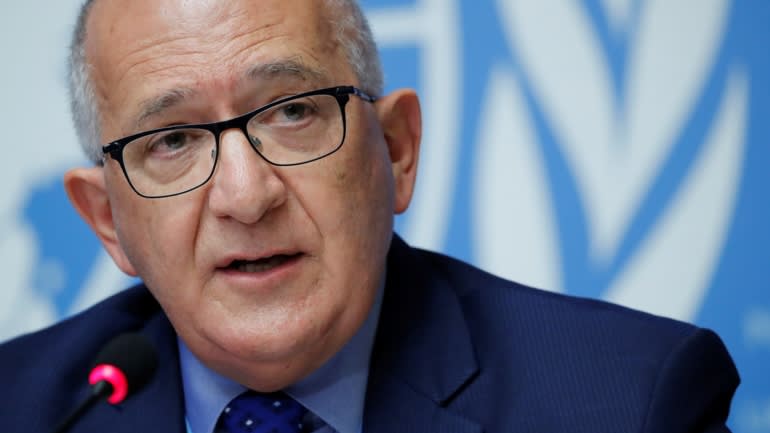 Chris Sidoti, a member of the Independent International Fact-finding Mission on Myanmar, speaks to reporters at the United Nations in Geneva in 2018.   © Reuters

Speaking at a Senate budget estimates session on June 3, Australian Foreign Minister Marise Payne said the question of whether to impose sanctions was still "under review" and would depend on Australia's "national interest."

Christopher Lamb, former ambassador to Myanmar and president of the Australia Myanmar Institute, said this argument does not hold up. He said he sees "no obvious reason for the lack of action."

"If it were just a theoretical case of a country far away, then the public-interest argument might lose its force," he said. "But in this case, there is a significant public interest in Australia, which is evidenced by two parliamentary hearings and a bipartisan approach to the need for action on Myanmar in the form of a cross-party committee."

Lamb said he is disappointed but not surprised.

"We have a situation in Australia where governments tend to take the least problematic option and say nothing. Australia was once a prominent defender of human rights: In 1948, we were the first country to propose the establishment of an international criminal court. But we don't see that anymore."

Australia has also lagged behind the U.S. and other Western peers in establishing Magnitsky-style laws -- broad legislation used to sanction foreign officials over human rights.

But within Australia, calls for the Scott Morrison government to do more on Myanmar are not dying down.

The co-founder of Democracy for Burma, Nang Si Si Win, has attended numerous rallies and vigils in Sydney. "Australia's Burmese community is appalled by the reaction of the Australian government," she said. "They have done nothing to acknowledge that the military is denying democracy to Myanmar, committing brutal killings and violating basic human rights. Their lack of action is shameful." 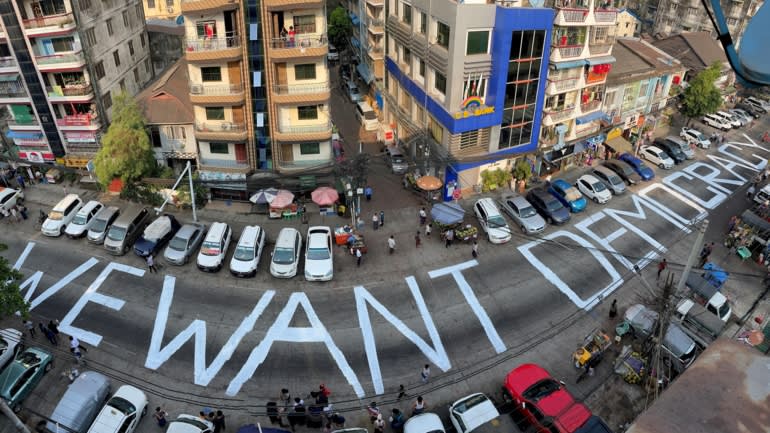 "We want democracy" is spelled out on a street in Yangon in February, weeks after the coup.   © Reuters

She wants to see at least 200 individuals slapped with travel bans and targeted sanctions, including Min Aung Hlaing and his wife, the latter of whom visited Australia on vacation several years ago.

Greens Sen. Janet Rice pointed out that 390 civil society organizations in Myanmar sent an open letter to Australia's foreign minister in May calling for sanctions. Yet their pleas appear to have fallen on deaf ears. Rice told Nikkei that it is "unconscionable" that Australia still has not gone after Myanmar's military.

"Every day this goes on, more people are imprisoned, injured or killed," she said. "The people in Myanmar, and the diaspora communities here in Australia, are demanding action. Australia must listen, and we must act -- urgently."

A Department of Foreign Affairs and Trade official rejected the idea that imposing sanctions would provide any practical benefit to the people of Myanmar.

"I'm not naive in thinking that sanctions turn everything around overnight, or even in the medium term," he said. "It takes time for them to bite. If we had imposed sanctions [on the top officials] in 2018, they would be biting now. And there is already some evidence that the sanctions imposed by other countries over the last four months are impacting the military's access to cash."

One possible explanation for the softly-softly approach is the detention of Australian academic Sean Turnell, who on Feb. 6 became the first foreign national to be arrested in relation to the turmoil. He awaits trial in Yangon's Insein Prison and could face more than a decade in prison for supposedly trying to flee the country with "secret information."

Nicholas Coppel, adjunct associate professor at Monash University and former ambassador to Myanmar, said that Turnell "is not being held hostage because of anything Australia is saying or doing."

Sidoti said Turnell's incarceration is proof that the current policy is not working and that the military regime does not "give a damn what Australia thinks." Min Aung Hlaing, the commander in chief of Myanmar's ruling military. Australia has appeared reluctant to punish him directly for either the treatment of Rohingya Muslims or this year's coup.   © Reuters

Payne has pointed to the fact that Japan, South Korea and members of the Association of Southeast Asian Nations have also refrained from imposing new sanctions. On June 3, she said, "We have been very committed to supporting regional efforts to de-escalate the situation in Myanmar and to work towards a solution."

Coppel made a similar point that Australia is under no obligation to follow traditional democratic allies.

"Australia is not an outlier. It is only the U.S., Canada and the EU that have imposed new sanctions -- the remaining 180 or so countries in the world have not. We have an independent foreign policy, and we have strong relationships throughout the region. It's a style of diplomacy that is different from countries who are very far removed, and don't have deep relationships in the way that we do."

He also believes the often-heated debate on sanctions obscures the real problem.

"There's no point trying to create divisions in our society on the basis of this. We really need to keep the focus on the commander in chief. He is the man responsible for the entire crisis. All these other activities which look at other things just take all the oxygen and distract us from the real culprit, Commander in Chief Min Aung Hlaing."

Sidoti, however, is adamant that sanctions are one of the few meaningful ways Australia could push for the restoration of democracy.

"The future of Myanmar is going to be resolved by the people of Myanmar, whether now or at some point in the years to come. As outsiders, there are two things we can do: offer support and encouragement to the democratic movement, and send a clear signal to the military that their conduct will be penalized by the outside world. Sanctions are a way of doing both those things."