Singapore: Leaders of Myanmar's military junta could be investigated in Australia for alleged war crimes committed by security forces since they seized power in a coup last year.

Cases against several military figures, from field commanders to junta leader Senior General Min Aung Hlaing, are being prepared by Myanmar's National Unity Government (NUG), a shadow administration of officials elected before the coup. They would be pursued in Australia under universal jurisdiction. 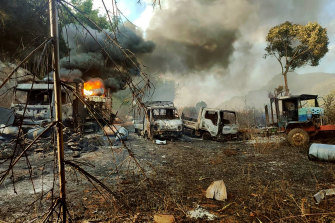 In this photo provided by the Karenni Nationalities Defense Force, smokes and flames billow from vehicles in Hpruso township, Kayah state, in which people were shot and burnt on December 24.CREDIT:AP

The move allows for individuals suspected of committing crimes against humanity, genocide, torture and other war atrocities to be tried under Australian law even if the alleged acts did not take place on Australian soil.

Dr Tun-Aung Shwe, the NUG representative in Australia, told The Sydney Morning Herald and The Age he had engaged the pro bono division of law firm Gilbert + Tobin to bring the cases before Attorney-General Michaela Cash or her successor if Labor wins government at the upcoming federal election.

Such prosecutions need the approval of the top law officer in the country to proceed but Shwe argues the evidence of atrocities is too compelling to ignore.

He said the cases against officials in the Tatmadaw, as the military is known, would revolve around mass killings in Kayah state in eastern Myanmar and the Sagaing region, in the north-west, as well as clearance operations in western Chin state in which civilians were targeted and villages burnt to the ground.

Among them is last year's horrific Christmas Eve massacre in Kayah's Hpruso township in which at least 35 people were shot and incinerated in their cars. The victims included two staff members from the humanitarian organisation Save the Children.

According to Shwe, the cases are being made against field commanders in the regions where the atrocities took place as well as those deemed to have overall responsibility for the military's conduct, principally Min Aung Hlaing.

Danny Gilbert, the managing partner at Gilbert + Tobin, said: "We have been asked by some prominent Burmese Australians to investigate the possibility of bringing war crime charges against members of the Myanmar military junta.

"A national government needs to commence such a claim so our role would be preparing a brief to try to persuade the federal AG to act."

There are international precedents under the premise of universal justice including European nations investigating war crimes in Syria, Iraq and now by Russian forces in Ukraine. A court in Argentina also last year approved an investigation into atrocities perpetrated by the Myanmar military against the Rohingya ethnic minority in 2017 that were this week determined by US President Joe Biden's administration to have amounted to genocide.

In Australia, the investigating agency would be the Australian Federal Police. 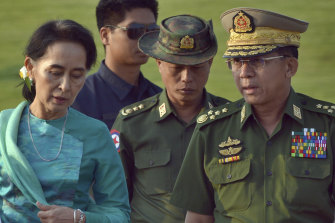 Aung San Suu Kyi with Min Aung Hlaing, right, before the coup. She has been detained since February 2021 on 17 charges brought against her by the junta that could see her sentenced to more than 100 years in prison.CREDIT:AP

Rawan Arraf, a lawyer and executive director of the Australian Centre for International Justice, has urged Australia to take on universal jurisdiction cases and for the AFP to establish a permanent war crimes investigation unit, not least because the veto power of states on the United Nations Security Council dilutes the reach of the International Criminal Court.

"Australia should step in and ensure that perpetrators do not enjoy impunity," she said.

There have been several applications in Australia in the past decade, most notably in 2018 when a group of Australian lawyers tried to have Myanmar civilian leader Aung San Suu Kyi prosecuted over the ethnic cleansing of the Rohingya, and in 2011 when a case was brought against Sri Lanka's then president, now Prime Minister Mahinda Rajapaksa for its military's killing of as many as 40,000 Tamil civilians during the civil war. Both were dismissed because they had immunity under international law as heads of state or heads of government.

The newly formed Australian Office of the Special Investigator is delving into allegations of war crimes by Australian special forces in Afghanistan but Arraf believes "the will of the police to undertake investigation of international crimes, particularly where there is no real Australian link, has not been there". 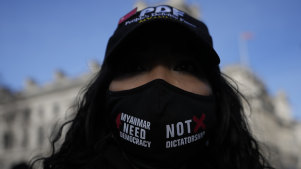 Labor and non-government organisations have called on Australia to follow the US, United Kingdom, European Union and others by imposing targeted sanctions on Myanmar's military junta, which calls itself the State Administration Council. But Foreign Minister Marise Payne has indicated sanctioning the regime is not in Australia's national interest.

The government has been unsuccessful in securing the release of Australian economist Sean Turnell, an advisor to Suu Kyi who has been detained in Yangon and Naypyidaw since February 2021. He is facing charges brought by the junta of violating state secrets.

The UN last week released a report cataloguing the Myanmar military's deliberate targeting of citizens, including with air strikes on heavily populated areas, declaring "the appalling breadth and scale of violations" could amount to war crimes and crimes against humanity.