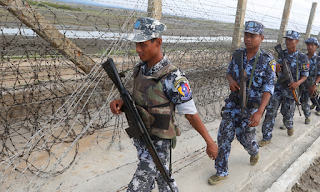 Myanmar border guard police officers patrol along a beach near a makeshift camp at the Myanmar-Bangladesh border. Photograph: Hein Htet/EPA
A former Rohingya MP has been arrested in Myanmar, in move that has been condemned as a further escalation of the attacks on the Rohingya community.
Aung Zaw Win, a major property tycoon and former MP for the Union Solidarity and Development party, was arrested at Yangon international airport on Wednesday as he was about to leave on a business trip to Bangkok.
A government statement said he has been accused of financing the Arakan Rohingya Salvation Army, the Rohingya military group.
Aung Zaw Win remains in custody in Mingaladon police station, near Yangon airport, but despite being held for five days has undergone no questioning.
Rohingya activist Nay Say Lwin said "the government and military [is] sending a signal to all of the Rohingya living and working in Yangon that they are also under threat, that they want to destroy the whole Rohingya community, not just those in Rahkine". 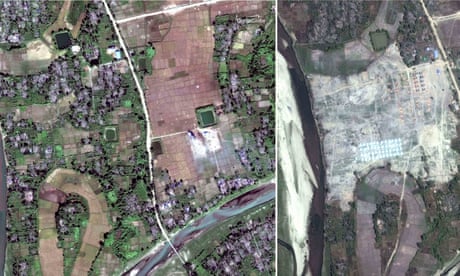 'Everything is gone': satellite images in
Myanmar show dozens  of Rohingya
villages bulldozed
Read more
Since August 2017, thousands of Rohingya have been killed and more than 700,000 fled to neighbouring Bangladesh after a military-led campaign of violence which Yanghee Lee, the UN special rapporteur for human rights in Myanmar, recently said had the "hallmarks of genocide".
Aung Zaw Win is one of the most prominent Rohingya businessmen in Myanmar, with a vast property empire which includes hotels in Yangon and and Naypyidaw, as well as numerous construction companies. He was also MP for Maungdaw in Rahkine until 2015.
Mark Farmaner, director of Burma Campaign UK, said: "It's extremely worrying that he has been arrested like this. This is just how the old military dictatorship acted."
Aung Zaw Win's arrest has come as a surprise to many, for he is well known for his close ties to the military and is a divisive figure among the Rohingya. His involvement in politics was mainly for business purposes and he steered clear of making any political statement regarding the plight of the Rohingya in Myanmar
As an MP he was even among those who pressured the Rohingya community to accept Bengali identity, a proposal which reinforced the idea that they are not native to Myanmar but immigrants from Bangladesh.
Nay Say Lwin said that the timing of the arrest, against the backdrop of the attacks against the Rohingya, was "a clear threat to all the Rohingya in Yangon. That no one is safe from arrest, even if you have big business or are close links to the military."
He said it was "extremely unlikely" that Aung Zaw Win was involved in funding ARSA because "he has never been an activist and as a businessman with billions in property, he would never engage in this kind of activity – he only cared about his business".
Some have controversially suggested that ARSA was in fact a proxy of the Myanmar military, created to give them a legitimate reason to step up their attacks on the Rohingya. "He is the military's man and if he did finance ARSA, it's my view it would only have been because of pressure from them," added Nay Say Lwin.
Another source who preferred to be unnamed for security reasons, echoed the view that "average Rohingya have long distrusted [Aung Zaw Win]. Many believe he's connected to the military, and some believe he was instrumental in fomenting violence in 2012, after which he was rewarded land in Yangon and Naypyidaw.
"Some believe he worked with the military to create and instigate Al Yaqin [ARSA], creating the conditions for a military takedown of all civilians. And now they're taking him down."