The Berlin Call for Rohingyas’ Protected Return to Protected Homeland 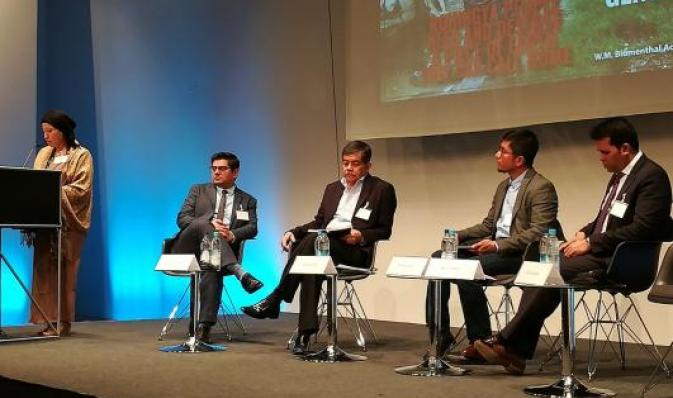 At the Berlin Conference on Myanmar Genocide held at the Jewish Museum today the participating scholars, activists and concerned citizens issue the following call:

We are gravely concerned about Myanmar's still unfolding atrocity crimes, with signs of genocide mounting, against the Rohingya people, including undeniable ethnic cleansing on a massive scale with destruction of hundreds of Rohingya villages as the government bulldozes charred villages, burns abandoned Rohingya houses, threatens the Rohingya who are still inside the country and asks Bangladesh authorities to cut off the flow of essential food supplies to over 6,000 Rohingyas who have fled to No Man's Land between the two countries' borders.

We thank the people and Government of Bangladesh for their exemplary acts of compassion and humanity in opening their borders to the terror-stricken Rohingyas fleeing the killing fields of Western
Myanmar state of Rakhine or Arakan.

In the immediate terms, we call on governments and non-governmental humanitarians to significantly increase the volume of humanitarian assistance for the Rohingya in refugee camps in Cox's Bazaar in order to ease the burden on the Government of Bangladesh and enable UN agencies to carry out their humanitarian responsibilities.

We believe that the protected return of Rohingya refugees – estimated at nearly 1 million – into the protected homeland is the only viable long-term solution in a situation where Myanmar – the military, the Buddhist Order, the lay public and the civilian political parties including the ruling NLD – have categorically maintained the country's long-standing refusal to recognize the presence, identity and history of the Rohingya in Myanmar and disregard their group right to self-identify.

We are profoundly disappointed that the Security Council has failed to agree to take a common stance, after 2 public meetings, in the face of what is increasingly recognized as crimes against humanity and even genocide, and been unable to issue even a single non-binding resolution on Myanmar's resultant worsening humanitarian crisis six months after 688,000 Rohingya – mainly women and children – fled the country.  If ever there was a time for prevention of genocide and for activation of the Responsibility to Protect principle it is now.

Therefore, we call on the governments of the USA, UK, France, Germany, Sweden and Canada, as well as other national governments such as Turkey and regional associations to hold a Special Conference to explore viable long-term solutions so that the Rohingya people can have a piece of earth they can call their home.