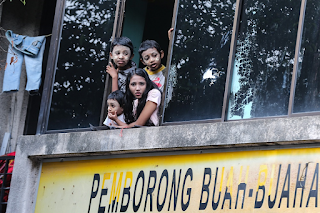 Children from the Rohingya community peer out a window from the top floor of a shoplot in Selayang August 22, 2018. Seven children have been detained on arrival and transferred to the Belantik Immigration Depot in Kedah where they have remained since.— Picture by Ahmad Zamzahuri
KUALA LUMPUR, Nov 8 ― Lawyers are seeking the release of seven Rohingya children from ongoing detention by immigration authorities in Kedah that has stretched to seven months now since they arrived in Malaysia.

The children, five boys and two girls, reached Langkawi on a boat with 56 people on April 3. The boys are aged 10 to 14 while one girl is aged 14 and the other, five.

According to the lawyers, these seven children detained on arrival and transferred to the Belantik Immigration Depot in Kedah where they have remained since.

"These minors who are as young as 5 years old have been in detention for more than 7 months now and attempts to access these minors by UNHCR, lawyers and family members were not successful at the time when the application was filed.

"Most of them are unaccompanied minors," the legal team said in a statement today, referring to the United Nations High Commissioner for Refugees.

Lawyers for the seven children had on September 10 filed a habeas corpus application at the Alor Setar High Court in Kedah to challenge their allegedly unlawful detention and secure their release.

In the habeas corpus application sighted by Malay Mail, the lawyers are seeking for courts to order that the seven children be brought before the judiciary and subsequently released.

The lawyers are also seeking recognition that children's continued detention to be illegal and against their rights under the Federal Constitution, the Child Act 2001 read together with Article 22 of the Convention on the Rights of the Child.

Among other things, Article 22 states that countries who signed the convention should take appropriate measures to ensure a child seeking refugee status receives protection and humanitarian assistance. Malaysia has ratified this convention.

The lawyers also want the High Court to safeguard the seven children against rearrest or further detention due to their immigration status when they are released.

Alternatively, the lawyers are seeking that the seven Rohingya children be released from immigration detention and be placed at a children's shelter until they are reunited with their family or based on terms decided by the court.

The reasons given in the application are that the children's rights under Article 5(3) of the Federal Constitution to consult and be defended by a lawyer upon their arrest was allegedly violated, as the refusal to allow them to meet their lawyers or family allegedly amounted to an oppression of their rights to know why they were being detained and also denies their rights to challenge the detention.

The other grounds for the application include the children's detention allegedly being unlawful, irrational, arbitrary and unreasonable.

The lawyer also highlighted that the Rohingya children's indefinite detention to be invalid as they may not be deported due to their statelessness.

The habeas corpus application will be heard by High Court judge Datuk Ghazali Cha at the High Court in Alor Setar on November 11.

The lawyers for the Rohingya children are Collin Andrew, Chan Yen Hui and Lee Shee Pin, who have been working together on this case with UNHCR for free.

According to the lawyers, the Bar Council and the Human Rights Commission of Malaysia (Suhakam) are also holding a watching brief on this case.