Source from Kaldan Press, 15 April 2012
Teknaf, Bangladesh: A High level delegation of UNHCR and Bangladesh concerned authorities for refugee repatriation jointly held a meeting with official refugees in the Nayapara camp on April 9, regarding the repatriation, said a schoolteacher from Nayapara camp. 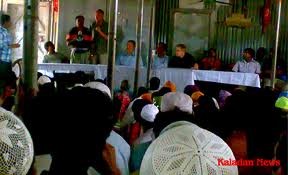 Hunt Chess, the Country Representative of Burma of UNHCR explained the refugee about the situation of Burma.

Hunt Chess, the Country Representative of Burma of UNHCR who recently came from Burma said that “the political situation of Burma is changing and the economic development is also progressing than before. Besides, Daw Aung San Suu Kyi including other political prisoners was released by the Burmese authority.”

“I come here to inform the refugees about the situation of Burma and the progressiveness which has been made recently in Burma. If the refugees want to go back, we will facilitate the refugees return.”

Feroz Salah Uddin, the Refugee Relief and Repatriation commissioners (RRRC) said, “We don’t want to force the refugees for repatriation, we want voluntarily repatriation. Refugees can go back to Burma and we want to take decision by themselves.”
The country representative of UNHCR, Dhaka, RRRC, Kamorul Zaman, the Camp-in-Charge, office staff and others were participated in the meeting, sources said.

Noor Mohamed (27), a refugee from the camp submitted an application to the delegates, and it has the following points:  1) to recognize as citizens of Burma with Rohingya ethnicity by the UN-recognized democratic government of Burma,
2) to have equal rights like other ethnic groups in Burma,
3) to provide compensations and to return of confiscated lands and other properties,
4) to stop human rights violations and racial discrimination, especially against the Rohingya community.
“We will go back to our motherland, if our demands are accepted and fulfilled by the Burmese authority. We don’t want to stay in the small sheds with bad condition anymore.  How long are we living in Bangladesh in such condition?” Noor Mohamed said.

According to refugees, they also urged to the Burmese authority through the delegates to immediately fulfill the said conditions.
“Another refugee woman said, “We have been living in Bangladesh over 20 years. How long we have to stay here. We want our citizenship rights, equal rights and want to stay peacefully in our country.

The meeting was started at around 1:00 pm and ended 2:00 pm.
Similarly, the high level delegates also visited the Kutupalong official camp and held meeting with the official refugees, said a schoolteacher from Kutupalong camp.
Posted by NDPHR at 4/17/2012 12:37:00 am