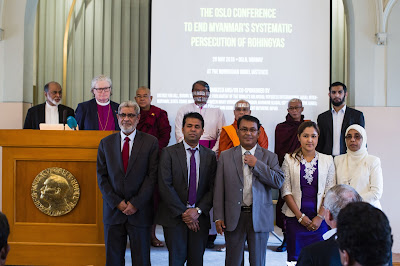 FOR IMMEDIATE RELEASE
Seven Nobel Peace laureates call the persecution of Rohingyas in Myanmar a genocide and demand action as two-day Oslo conference ends
Oslo, Norway, May 28, 2015 - A two-day conference focusing on ending the persecution of Burma's Rohingyas concluded today, with a call from seven Nobel Peace Laureates to describe their plight as nothing less than a genocide.
In his pre-recorded address to the conference, Desmond Tutu, leader of South Africa's anti-apartheid movement in the 1980s, called for an end to the slow genocide of the Rohingya.
Tutu's appeal was amplified by six other fellow Nobel Peace laureates: Mairead Maguire from Ireland, Jody Williams from the USA, Tawakkol Karman from Yeman, Shirin Ibadi from Iran, Leymah Gbowee from Liberia, and Adolfo Pérez Esquivel from Argentina. They stated that, "what Rohingyas are facing is a textbook case of genocide in which an entire indigenous community is being systematically wiped out by the Burmese government."
Philanthropist George Soros drew a parallel between his childhood memories of life in a Jewish ghetto under the Nazi occupation in Hungary and the plight of the Rohingya after visiting Rohingya neighborhood in Sittwe which he called a "ghetto". "In 1944, as a Jew in Budapest, I, too was a Rohingya… The parallels to the Nazi genocide are alarming," he said, in a pre-recorded address to the Oslo conference.
The meeting was held at the prestigious Norwegian Nobel Institute and Voksenaasen Conference Center in Oslo, Norway. It was attended by Buddhist monks, Christian clergy, and Muslim leaders from Myanmar. Also present were genocide experts, international diplomats, interfaith and human rights leaders. Attendees explored ways to end Myanmar's systematic persecution of the Rohingya, as well as foster and communal harmony in Burma.
Addressing the conference, Morten Høglund, the State Secretary of the Norwegian Ministry of Foreign Affairs, announced his government's decision to give 10 million Norwegian Kroner ($1.2 million US) in humanitarian assistance to Burma. The participants were dismayed however, as the State Secretary choose not to even mention the word "Rohingya" in his entire speech in an apparent compliance to Myanmar's government stand.
The conference communiqué urged the Norwegian government to immediately prioritize ending Myanmar's genocide over its economic interests in Burma, including sizeable investment by Telenor and StatOil.
During the conference, former Prime Minister of Norway Kjell Magne Bondevik
conferred on three leading Myanmar monks who have saved Muslim lives in Burma and opposed Islamophobia the first-ever "World Harmony awards" on behalf of the Parliament of the World's Religions, a 120-year-old interfaith organization. Rev. Seindita, Rev. Withudda, and Rev. Zawtikka, were the three awardees who also chanted Buddhist prayers at the inauguration.
Presenting the awards, the Parliament's chair, Imam Malik Mujahid said, "These extraordinary monks challenge the widespread perception that all Buddhist monks clamor for violence against the Rohingyas."
The participants from 16 different countries, including leading Rohingya activists and leaders, as well as genocide scholars, adopted the following statement:
--------------Full text of the communiqué adopted by the Oslo Conference----------
Today the Oslo Conference to End Myanmar's Persecution of the Rohingya ended. The conference was held at the Norwegian Nobel Institute and Voksenaasen, Oslo, Norway on May 26 & 27, 2015.
After two days of deliberations the conference issue the following urgent appeal to the international community, based on the following conclusions:
1. The pattern of systematic human rights abuses against the ethnic Rohingya people entails crimes against humanity including the crime of genocide;
2. The Myanmar government's denial of the existence of the Rohingya as a people violates the right of the Rohingya to self-identify;
3. The international community is privileging economic interests in Myanmar and failing to prioritize the need to end its systematic persecution and destruction of the Rohingya as an ethnic group.
The call by Archbishop Desmond Tutu to end Myanmar's genocide of the Rohingya made during the Oslo conference is supported by six additional Nobel Peace Laureates: Mairead Maguire, Jody Williams, Tawakkol Karman, Shirin Ibadi, Leymah Gbowee, and Adolfo Pérez Esquivel.
The United Nations and the international community have an urgent responsibility to stop Myanmar's systematic persecution of the Rohingya.
As the home country of the Norwegian Nobel Institute, the conference urges the Government of Norway to immediately prioritize ending Myanmar's genocide over its economic interests in that country, including sizeable investment by Telenor and StatOil.
The conference calls upon the Association of South East Asian Nations (ASEAN), the European Union (EU), the Organization of Islamic Cooperation (OIC), the United
Nations (UN) and other relevant international actors to take all possible measures to pressure the Government of Myanmar to do the following:
to immediately end its policies and practices of genocide;
to restore full and equal citizenship rights of the Rohingya;
to institute the right of return for all displaced Rohingya;
to effectively provide the Rohingya with all necessary protection; and
to actively promote and support reconciliation between communities in Rakhine State, Myanmar.
Contact Persons:
USA: Imam Malik Mujahid
Chair Burma Task Force USA
malik@SoundVision.com
1-312-804-1962
UK: Dr. Maung Zarni:
447710473322
fanon2005@gmail.com
Co-Author: Co-author (with Cowley) "The Slow Burning Genocide of Myanmar's Rohingya"
[Background information on the conference: The conference was co-organized and co-sponsored by the following organizations. However, the communiqué was adopted by the attendees of the conference without any approach to the respective organizations.
Justice for All, Burma Task Force USA; Parliament of the World's Religions; Refugees International (USA); International State Crime Initiative (ISCI) Queen Mary University of London; Harvard Global Equality Initiative (HGEI); Oxford Poverty and Human Development Initiative (OPHI).
Dr. Maung Zarni and Imam Malik Mujahid serves as the co-chair of the conference]
Photos:
For conference photos contact Ahmed@BurmaMuslims.org
Links to transcripts and images
Link to the official transcripts of the recorded messages including that of Archbishop Tutuhttp://www.maungzarni.net/2015/05/the-speech-of-archbishop-desmond-tutu.html and George Soroshttp://www.maungzarni.net/2015/05/the-speech-of-george-soros-at-oslo.html
Link to their video recordings at
https://drive.google.com/file/d/0B1Os6IDEJi3ZLXE2ZVh0c3MxRmM/view
Links to some of the news coverage:
Suu Kyi not invited to meeting on persecuted Rohingya
Link Myanmar aid to Rohingya rights: Tutu
Aung San Suu Kyi must act on refugee crisis: Dalai Lama
As Nobel winners gather to speak out about Rohingya
- See more at: http://www.maungzarni.net/2015/05/seven-nobel-peace-laureates-call.html#sthash.hf8iQ6Jj.dpuf