Brief:
Practically, it is not the 1982-citizenship laws that stripped off citizenship but the authority who are intentionally reluctant to access the Rohingya's historical existence and ancestral evidence that prove primary evidence earlier than prior to 1824 and also not allowing to recourse the citizenship under new citizenship act. The fact is that after British occupation of Arakan in1824, the repatriated Rohingya war victims of 1784 and 1794 Burman king invasion of Arkan, were miscounted as British era settlers by central rulers.


Estimation to figure out accurate number of the total Arakan population is difficult because the government's immigration figure states just around 4 millions in 2009 that always excludes Rohingya population of both inside and outside. The inclusion of Islam religion in that 4 million figure is just covered Kaman muslims and Rakhine muslims living in Sittwe, Rambre, Minbya, Mrauk Oo, Tandwe and Myebon townships.


Latterly,  the various intl reports of estimating around 800,000 Rohingyas is just for Northern Arakan/Rakhine (NRS) that doesn't count the Rohingyas living in Southern Arakan of Sittwe, Kyauktaw, Mrauk Oo, Kyaukpyu and Pauktaw townships.
Total population would be the sum of those excluded number of Rohingyas from both north and south of Arakan and hidden number of recent Bengali Rakhine migrants from Bangladesh and recent Burman settlements. It is no doubt that they all will be made at least six million.


The authorities jointly with Rakhines people are subsequently fingered Rohingya population in Northern Arakan State-NRS which was also referred as Mayu Region consisting Maungdaw, Buthidaung and some part of Rathedaung during 1959 to 1965.


As a fore-explanation, the fact of violations against Arakanese Rohingyas during communal riots, political occasions and sectarian attacks which were took place mostly in power transition periods, Rohingyans had to unavoidably refuge at neighboring countries. Even on the time of their repatriation, they were not resettle in the villages of where they were driven out. And they were easily and forcefully relocated near by where majority Rohingya lived.


In the amid of humanitarian crises in June 2012, puppet PM Thein Sein came to urge UN and intl communities  to transfer all muslims of Arakan state. However, such tune changed when Turkey came along with 50 million aid of KSA. The government immigration officials conducted population check that 'most found non-foreigners in Arakan'.  It is the government just finding again alternative track of conducting family census check in order to expel them when their evidences were burnt and they lands and registration have not been performed for decades..
The land Arakan was earlier inhabitants of Indiana people and ruled by Hindhu Dynasty up to 8th century AD. It is very clear that today culturally and physically similar type of Indiana people are only Rohingya type of people. Since Islam religion came to introduced in Arakan, Rohingyas are part of the people who converted to Islam so they may be regarded as native convert rather than decedent of earlier Arab, Persian, Turkish, Bengali, and Pathan origin. Otherwise, yes, their religion was descent from but not the people..
In regard to establish Rakhine Independent state and Buddhism state in the other hand, Rakhine nationalists and the country rules are just eagerly trying to expel entire muslims of Arakan through progressively with various manners. Beside, Rakhine historians reused the name Arakan in historic seminars despite they changed as Rakhine in 1974 which is the main key point of Rakhine people became the main people in the 1982 Citizenship Constitution that disregarded other inhabitants of Arakan because the name Arakan represents all inhabitants residing within her. Likewise, Rakhine historians also rewrote about the reason of it people’ appearance like Mongo rather than Indian was such as for its people were believed to be mixed in India before migration into Arakan. More by quoting the historical statues that in deed were only belong to Hindhu type of religion but not ….
Majority of racist Rakhine people jointly with nationalist politicians, bias academics, extremist Rakhines and radical monks who have resentments towards Rohingya are openly saying that they never heard of Rohingya and misquoting as recent intruders and British era settlers. Despite there are ample of evidences including those written in Burmese newspapers. The denial of Rohingya is being their main objective rather than national unity for democracy and national building. 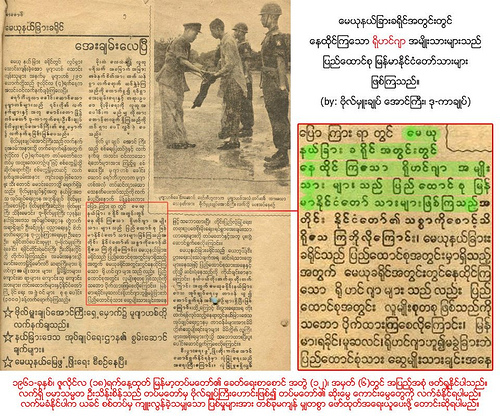 “In this newspaper report of July 1961, it was written- "National Rohingyans living within Mayu district are, nationals of Union of Myanmar"}


Further in exile, Burmese nationalities who seek refuge and championing in human rights, too are opposing the plight of Rohingya and misinforming across the social networks and in various propaganda meetings


In calculation of the population growth of both Rakhine and Rohingya, Rohingya is still behind than Rakhine? Because only Rohingya or muslim were all the times driven out from homelands. Today Rohingya population both inside and outside is just around 2.5% of the country's total population 65 millions. But the government wrongfully view this few number as national threat. 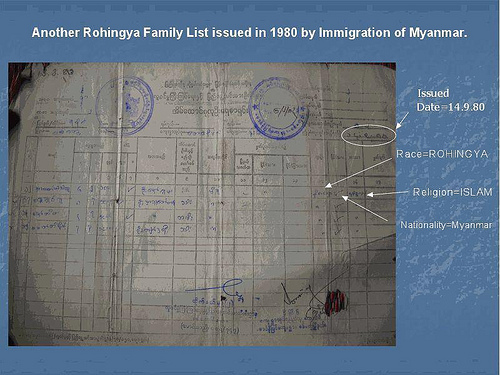 
But Rakhines people fancily describe Rohingyans as recent migrants. Indeed, in the past five decades, there was no Rakhine settlement found in the territory of Northern Rakhine State-NRS. Today Rakhines those found in these regions were brought by government under the model village settlement program from year 1991. Even in Sittwe during British Era, Muslim population was quite bigger than Rakhine.


Among them, three major attacks recorded; the first attack by king Anawrahta in 1044, the second invasion by king Min Khaung Yaza’s in 1406 and the third major invasion was by Budapawa (King Bo Daw) in 1784. 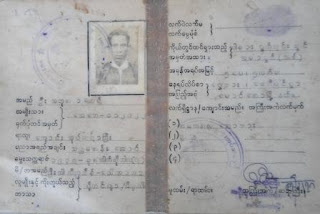 
As our conclusion, the world most persecuted Rohingya issue remains unsettled. Whenever the Rohingya issues recurred sporadically, it has been put to deal with human trafficking measure.


The neighboring countries do not find further option accept from sending back into the danger of where they came from. Thou, Bangladesh too has concerned for Rohingya matter keeping alive.


After the recent ASEAN summit in 2009, when Datuk Sri Abdullah Ahmed Badawi, the prime minister of Malaysia was asked to had comment on the Rohingya, he said we have some problems with the Rohingya. When they come to us of course we know that they are from Myanmar, but when we ask Myanmar, they ask: “are you sure they are our people? What evidence have you got?


During the visit of UNHCR chief Mr. Antonio Guterres to Arakan state of Burma, came to conclusion that UNHCR’s current level of activities in northern Rakhing state where Rohingyas live does not correspond to the actual needs and a decision was taken to upgrade the program with immediate effect, a UN statement announced on 12th of March 2009.


It has been so long intl communities approach the demon Burmese military junta through so call diplomatically. That is why the demon government more and more dares to repeatedly commit un-excusable crimes against minority communities .

Therefore, it is the time that the UN and its super power countries are in position to interfere by deploying intl peace keeping forces in order to ensure to guarantee the dignity and rights and the continuous co-existences of Rohingya in Arakan State. And elimination of all forms of abuses, discrimination and humiliation against Rohingya should be materialized at the same time.