Rakhine Monks and Authority Are Trying To Change Mosque To Monastery


A Rohingya's letter (via Bo Min Aung) regarding part of how Rakhines and authority are looting Rohingya's properties, lands, religious buildings. It is nothing to say more than how they are insulting even on religion. God Buddha did not teach to do like this.. 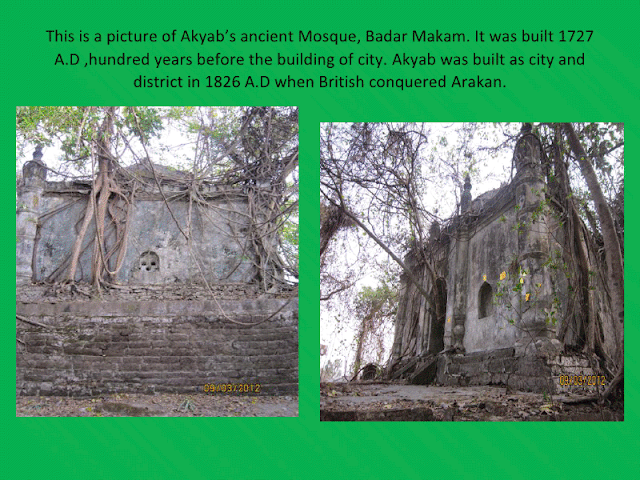 The shrine mosque of  Badar Makam (Budder Mukam), built in memory of the eminent Saint Allama Shah (Pir Badar Sha) in 1727. It was meditation place of saints, historian says the place was located since 7th Century AD during Islamic preachers arrived..
It is situated in the territory of East Sanpy (East Barsara), near Sittwe Point on the southern side of Akyab/Sittwe. There were two rocks lapping each other and lie in front of the shrine and caves used for meditation by Saint (Fakir). Despite they have been seized since 1978, muslims were allowed to worship until 1990. Farming lands near by it belong to Rohingya were also replaced with Navy camp before 1990. Now, the area was replaced with Military Training School and the building is  locked in the compound. 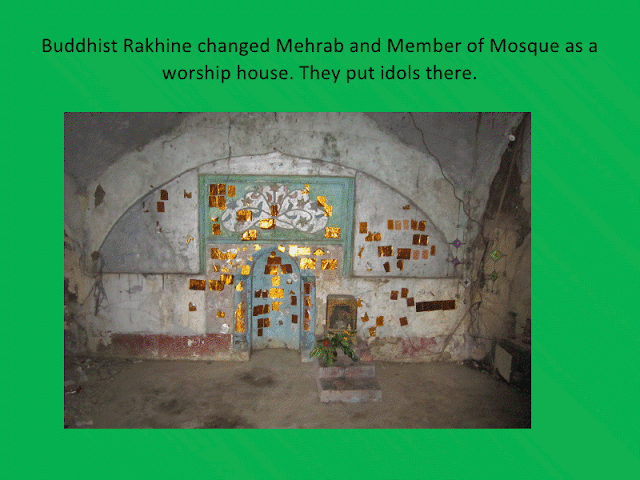 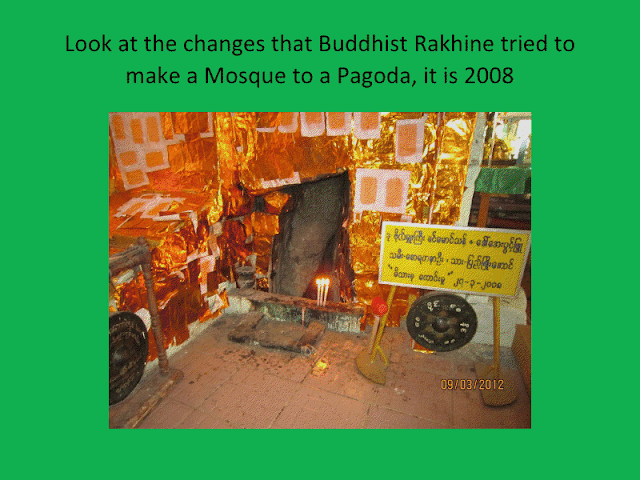 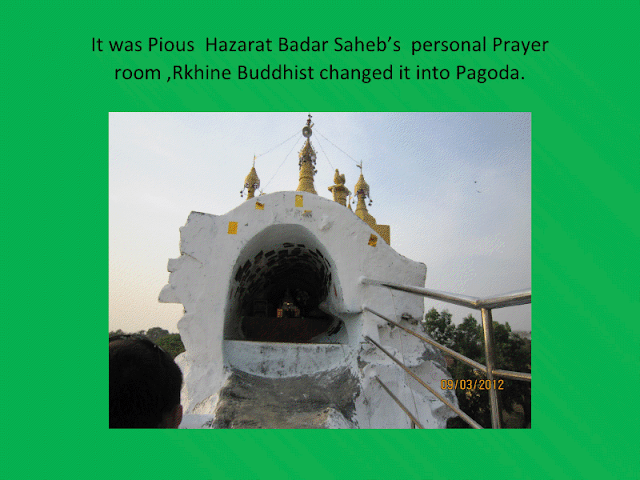 It was known as cave used for meditation 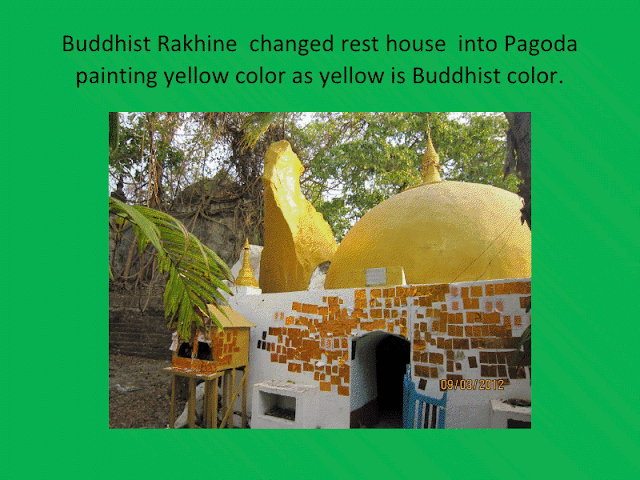 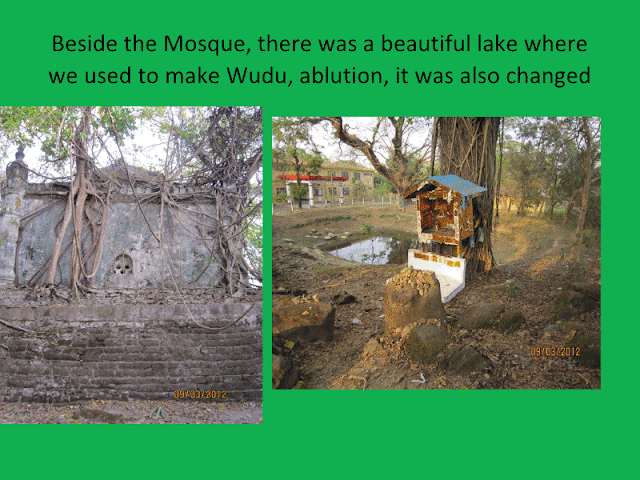 ..................
2) Another shrine Baziaraa mosque, tomb and pound are situated the southern part of Sittwe Lake (Kandawgyi) and muslim village near by it was Sanggana fara. According to Rohingya villager, this mosque was also built in a bit later time of Bandar Mokan. Despite the village and this mosque were seized in about 1985, muslims were allowed to pray until 1990. later it was locked and used as Military Camp. Authority also do not dare to destroy this mosque as it was built after that area appeared as a sign of the edge of Sittwe.

Destruction and Confiscation of other Ancient Mosques;
3) In 1993, Aung Daine village and Nyung Pin Zay village near by jetty, only Rohingya houses from Shit Taung including Shwedah Qazi Mosque, were demolished and relocated at Kwan Lon (Kha-wa-lon @ Mandarabyin) village. And the places were replaced with  Electric Station and house lots for military

4) In the middle of 1994, Aa-Lae-Zay @ Shwe Gu Daung village including Nan Oo Mosque, Kwan Lon (Kha-wa-lon @ Mandarabyin) including Sandhi Khan Mosque, Ponna Mraung village, were demolished by Military forces-540.
The villagers were forcefully relocated to Maungdaw town. Some Kwan Lon villagers who escaped had tried to resettle in own village by rebuilding temporary tents, were also lifted to Maungdaw town.
The villagers' lands were replaced with Military Forces-540, Military Forces-377 and Environmental Projects.

5) Maung Tha Gon (Rwa Handaa Fara) village including Musa Pali Mosque were demolished in about 1983. The villagers were relocated to Kan Paw village and their lands were replaced with model village of Rakhines and military purposes.

6) Farming lands of Paung Do (Fun-du-Kol) villagers were seized and replaced with Military Forces-378 but the village was not demolished up to year 2010.

4) stone structure Sandhikhan mosque built in 1433 by Muslim army Sandhikhan of Bengal who came to help enthrone king Narameikhla(The founder of Mrauk-U dynasty), in Kwan Lon (Kha-wa-lon @ Mandarabyin) village of Mrauk Oo, was demolished in 1994. The stone blocks and teaks beside the mosque were forcefully carried by Rohingya carts and used in expansion of  Buddhist monastery of Shwe Taung village.

4) Nan Oo Mosque and Nantha Tank with stone embankment, in Aa-Lae-Zay(Shwe Gu Taung) village, near by hospital and palace office, was demolished in 1994 but Nantha pound(tank) still exists.

5) stone structure Majah Pali @ Musa Pali Mosque with its big pond in the eastern, were built in 1513-15 in Kan Paw village, by an Indian missionary Musa in the time of 9th king of Mrauk U 1513-1515 A.D. It stands Maung Tha Gon Village, Mrauk-U and demolished in about 1983.

More about Bader Maqams:
1) Bader Maqams or the shrines of Badr Al-Din-Auliya (Part I), By M. Siddiq Khan
https://docs.google.com/file/d/0BwXg6atXJZrHZmRlN2I4NzItODQzMS00Njc5LWEwMGQtZDc5Y2I5YWJjMzAx/edit?hl=en_US