Waiting For Hope : List of Rohingya died from starvation in Kyauktaw, Minbya and Mrauk U

Source Eldersledge, 8 Jan
A Look At The Blockades' Affects
(part of The Darkness Visible series) 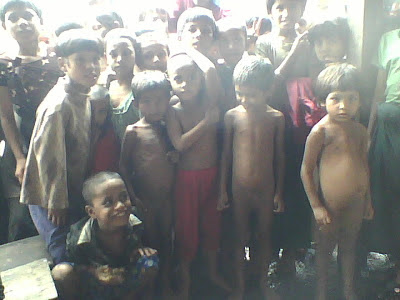 (December 03, 2012 Rohingya Children Starving in Burma)
In Burma the blockades still stand. Living testaments to the savagery of a government dedicated to the annihilation of the Rohingya, the police and military still hold back much needed food, water, and medicines. This incredibly disturbing method of warfare is dead set on starving the Rohingya out of existence. And yet for the past few months I have been unable to pinpoint where and how this method was being used.

Thanks to Jamila Hanan, an activist on Twitter, I was able to finally get my hands on some hard facts. The information however is nothing to be celebrated. For the man who sent it out of Burma is still stuck inside living the same hell his Rohingya brothers are suffering through. Aung Aung posted the following information earlier this month. 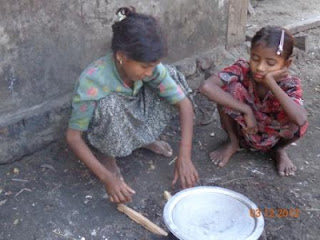 (Life For The Rohingya Hinges On Every Meal)
There are currently 15 Rohingya villages within the Min Pya area of Arakan, Burma. This is what is being reported out of Min Pya over the last month's time.
All these villages are starving to death due to the blockades the government of Burma has put in place. Out of this region the Rakhine Nationalities Development Party has been able to get 61 to leave Burma. Since Rohingya are forbidden to move from village to village without permission the Rakhine Nationalities Development Party is able to offer them a sense of false hope. This allows the RNDP to deport the Rohingya and achieve their aim of an ethnically pure Rakhine state. 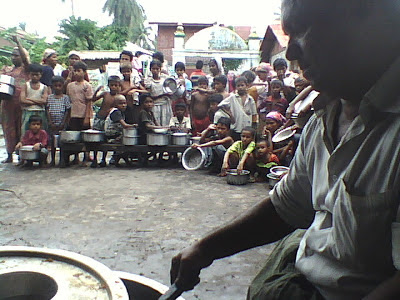 (July 5th, 2012 Hungry Then, Starving To Death Now)
In the Mrauk U area of Arakan, Burma there are 12 Rohingya villages. Aung Aung was not able to reach a handful of them due to the restrictions on communication. Of these we know only what has occurred in 8 of them over the last month's time.
All Rohingya in Arakan are banned from moving from one place to the next. Going out and looking for food will result in death or imprisonment. The WFP and other aid groups have only provided aid to one village in this area. The outside world that is helping seems to think that only the refugee camps need aid. Yet in reality those who are suffering in their homes, in their villages near by, are starving to death due to the blockades. The Rohingya in these villages can't go to the camps. The blockade is meant to keep them in place so that they will die where they are at. In affect, their homes are now their concentration camps.

Na Sa Ka and the RNDP are the only source through which Rohingya can travel anywhere. The Myanmar government however does not grant travel to the camps or to another village where food might have been rumored to exist. Instead the RNDP and Burma government find boats for the Rohingya. Then they send them out to sea without food, water, or medicine. These floating prisons are meant to kill as many Rohingya as the RNDP can trick into risking their lives at sea. They get them into the boats by telling them that they are going to Malaysia or some other foreign country. 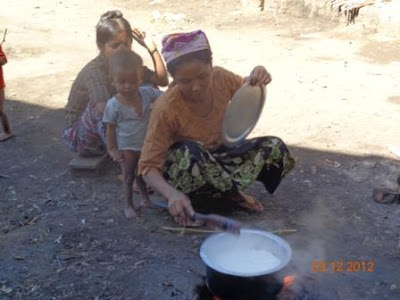 (Any Hope Of Food Get Attention In Starving Villages)
There are 22 villages in the Kyawtaw area of Arakan, Burma. In those 22 villages are 4,989 Rohingya who are starving to death. Due to the blockades and restrictions on communication, Aung Aung was unable to contact any of them except one. 605 Rohingya in Napukan Ywa were able to report that they were starving since food ran out last week. In addition to this we know that WFP provided a little food to 7 burnt villages ( Sancar Taung, Apauk Wa, Shwe Hlaing, Guppa Taung, Ambari, Ywa Nyar, and Radana Pun Taung Pway). The rest of the 15 villages are starving to death without aid or medicine.
Around 200 Rohingya in Kyawtaw area fled to the mountains last month. They were soon after arrested and taken into custody by the Myanmar government. Nobody knows what will happen to them. But it is safe to say that they will most likely end up dead. 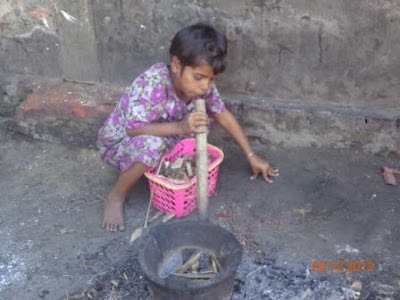 (Anything That Can Be Ate Is Being Cooked Just To Survive)
It is clear that the genocide in Burma is entering its final stages. The government is prepared to starve those they cannot kill outright. Children and women are being used in human trafficking and as sex slaves by the Myanmar officials. Men are being sent out in boats to die at sea by the RNDP. Those who are trapped in their villages are just waiting to die. Either the Rakhine mobs will reform or the Burmese government will wait for nature to take its coarse.
For now we are trapped in a position of waiting. We wait to see if the world will wake up before the clock runs out for the Rohingya of Burma. We wait to see if humanity can be salvaged or if we will watch yet another genocide reach completion right before our eyes.
Posted by NDPHR at 1/20/2013 08:36:00 pm