Hunted Down Like Dogs: RNDP Puts Up A "Bounty" For Every Dead Rohingya

Source Eldersledge, 19 Jan
RNDP Puts Up A "Bounty" For Every Dead Rohingya
(part of The Darkness Visible series) 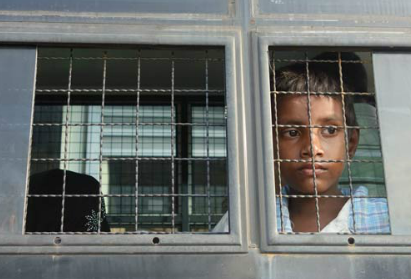 (This Boy Is Now A Commodity, Sold As A Slave Or Killed For A Bounty)
Rakhine Prime Minister, U Hla Maung Tin, arrived at Pauktaw this morning and made a beeline for the Rohingya refugee camp. Once there the PM fell in line with his party (the Rakhine Nationalities Development Party) by demanding that the Rohingya in the internally displaced peoples' camp sign documents that state that they are illegal immigrants. The documents state that the Rohingya are illegal Bangladeshi immigrants that have no claim to Burmese citizenship. These documents would be used therefore to deport the Rohingya to a country that has shown no interest whatsoever in accepting them. And without actual legal documents to show that they are either Burmese or Bengali, the Rohingya would officially in Burmese courts be "stateless".
When the Rohingya in the camp refused to sign the documents Maung Tin threatened the refugees and left. Maung Tin told the Rohingya refugees that if they did not sign that he would see to it that no aid ever made it through the blockades again (including rice from the foreign aid organizations). The RNDP went further by going to Rakhine villages and camps to pass around word of just what these threats entailed. The RNDP then went on to tell the Rakhine that they would pay one lakh kyats for every Rohingya, or kalar (a slur for the Rohingya), they kill. Together, Maung Tin and the RNDP, are making threats that could lead to a return to the June and October riots that launched their genocidal campaign.
This tactic of "sign or die" has been getting used more and more as the campaign of ethnic cleansing has been amped up. In addition to calling on renewed butchery by the RNDP, the Rakhine extremist have maintained their blockades of Rohingya villages and camps. The RNDP has also begun encouraging Rakhine from Bangladesh and impoverished areas of the Arakan to move into Rohingya villages. By calling the Rakhine "settlers" the RNDP shows that they are intent upon wiping out the memory of these Rohingya villages that were burnt or bulldozed.
With all the actions taken recently by a major Burmese political party to kill and deport an entire minority one might wonder how the outside world is ignoring this? Time and time again Alder's Ledge has brought proof of genocide taking place right now in Burma and yet these same articles fail to show up in mainstream media. So once again I'm sure there are those wondering just how something like that which has been shown above can take place without their media source covering it. I'm sure there are still far to many people with their eyes closed to this subject to understand that genocide is taking place as they sleep.
So imagine for a moment that you are a Rohingya trapped behind barbed wire and military checkpoints. Imagine that your family and friends are starving to death as you pick through the grass for any source of food you can find. Imagine that your government, your homeland, is treating you as though you aren't even human. Now imagine that you aren't allowed to leave... you aren't even allowed to travel to neighboring villages or camps.
All you know is hunger. All you know is pain. All you know is desperation.
Now imagine that the only way out is to flee by boat. Yet to do this you have to sell everything you have and scavenge for something to bribe the boat's owner. Imagine that you have no way to know if this boat will make it to the presumed safety of Malaysia or not. All you can do is hope that the Nasaka don't catch you as you drift off into the night.
Imagine that while you starve to death you are approached by Rakhine who promise they can get you out of Myanmar. Imagine that you are asked to sign a paper in exchange for a promise of a better life. Imagine that you don't realize that this paper will make you a slave and that you will be sold in Thailand or Bangladesh.
But imagine that you stay...
Now try to imagine that the RNDP just visited your village. Imagine that you just heard them proclaim that your Rakhine neighbor can earn cash money just for killing you. You know that your local police don't stop these attacks. You know that the military sides with the RNDP. You know that there is nowhere you can run. Now imagine that you are being hunted... but instead of running, you can only wait for your hunter to strike. You know that you are like a caged animal. You know that there is nowhere in you homeland that you can hide.
This is the life of nearly a million Rohingya trapped in Burma. This is how the government of Myanmar has allowed ethnic cleansing to occur in the Arakan. The Burmese have committed a forced famine, constructed death camps, blockaded entire villages, and permitted the wholesale slaughter of the Rohingya people.
It is a story that would enrage the common citizens of the West. It is a narrative that would sell papers across America and Europe. And it is a tragedy that the West could exploit at a moment's notice. Yet the prospects of Myanmar's untapped wealth have curtailed the actions these crimes demand. Once again the numbers were run and the prospect of economic gain topped the cost of saving lives.
Posted by NDPHR at 1/20/2013 08:44:00 pm