According to local media, Myanmar will become the first foreign purchaser of the Sino-Pakistan jointly produced fighter. 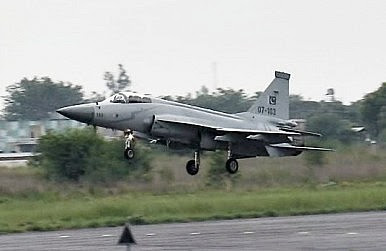 According to the Burma Times, Myanmar is looking to purchase a license to domestically produce the J-17 aircraft, which is called the FC-1 Xiaolong in China. If the report is accurate, it would make Myanmar the first foreign purchaser of the jet. Currently, only Pakistan's Air Force operates the J-17 and, as Ankit has reported, Islamabad is in the process of making a number of upgrades to the fighter jet.

Although the report is unconfirmed, it is extremely plausible. To begin with, Myanmar has previously operated or currently operates a number of Chinese-made aircraft including: 48 NAMC A-5C fighters, 52 Chengdu F-7M Airguard fighters and 4 Y-8 medium lift transports. The Southeast Asian nation's air force also recently purchased Sky 02A Unmanned Aerial Vehicles (UAVs) from China, and built domestic copies of them.

Most notably, Myanmar is also believed to operate 4-10 Karakorum-8 (JiaoLian-8) jet assault and trainer planes, which were also jointly produced by China and Pakistan. Some reports indicate that the deal for the K-8s also included a license in-country component.

Myanmar also reportedly considered purchasing the JF-17 a few years back before ultimately deciding to buy Russian-made Mi-29s. However, the Burma Times report said that Rangoon's aircraft has suffered from serviceability issues in recent years, and thus a locally assembled aircraft like the J-17 would make sense.

Myanmar is likely to use the JF-17 jets in part to help combat the Kachin Independence Army (KIA) insurgency in northern Myanmar. The purchase of the JF-17 will also help Myanmar keep parity with neighboring Bangladesh, which is expected to expand its air force in the coming years through the purchase of Russian or Chinese-made aircraft. Bangladesh has reportedly been offered and rejected the JF-17.

The Burma Times article noted that the JF-17 "can be armed with a variety of bombs and missiles including PL-5EII, PL-9C and PL-12 AAMs, C-802A anti-ship missiles, general purpose bombs, laser guided munitions and countermeasures on its 7 hard points (four underwing, 2 wingtip, 1 under fuselage). The aircraft's standard set of armaments are supplemented by a 23 mm GSh-23-2 twin barrel cannon or 30 mm version of the same."

The report failed to indicate whether Myanmar will look to purchase the Block I or Block II of the J-17s, but it did note that the former is priced at $20 million per unit while the latter is going for $25 million.

Regardless, Myanmar's purchase of the J-17 would be a huge boon for China and Pakistan. Both countries have tried to market the jet for export but have thus far failed to receive any customers. Pakistan pledged in 2013 to begin exporting the jet in 2014. As The Diplomat reported last year, "The Pakistan Air Force has been assigned [a] target of exporting 5 to 7 JF-17 Thunder planes next year and discussions in this regard are under way with Sri Lanka, Kuwait, Qatar and other friendly countries."