Save Rohingya ethnic minority from genocide, protect their rights 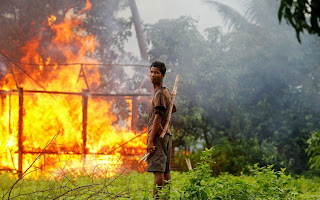 ROHINGYA Arakanese Refugee Committee and Rohingya Ulama Council (RUC) Malaysia and other Rohingya organisations in Australia, Canada and the US, are deeply concerned over the genocidal actions against innocent Rohingya people through their exclusion from Myanmar's ongoing census 2014.

They accused ruling Myanmar officials of being "grossly involved in conducting ethnic cleansing of Rohingya for decades".

Acciording to a press statement from the Rohingya News Agency on Sunday, the Rohingya organisations have appealed to the international community to push the United Nations Security Council (UNSC) to arrange an emergency session to send United Nations Peacekeeping Mission to Arakan State as soon as possible, to protect ‎massive killings and mass grave. They also appealed foran urgent suspension of the census and to re-conduct a fresh one ‎in line with international standards and human rights principles, suggesting the government commits to allowing ethnic Rohingya to fill up their original name "Rohingya".

Meanwhile, a UN human rights envoy says severe shortages of food, water and medical care for Rohingya Muslims in western Myanmar are part of a long history of persecution against the religious minority that could amount to "crimes against humanity".

Tomás Ojea Quintana's statement follows the evacuation of hundreds of humanitarian workers from Rakhine state, home to almost all the country's 1.3 million Rohingya Muslims, thousands of whom are living in crowded displacement camps.

The aid workers left after Buddhist mobs attacked their offices and residences two weeks ago. Some have tried to return, but have been barred by government.

Quintana, the UN special rapporteur on Human Rights, said the developments in Rakhine were the latest in a "long history of discrimination and persecution against the Rohingya Muslim community which could amount to crimes against humanity".

More than 170 aid workers were pulled out of the state as a result of last month's unrest, the first time they have been forced to leave en masse, and there are fears that the entire relief infrastructure has been severely damaged.