Our Note: In deed it's muslim-phobic in Rakhines. Rohingya or muslims living in Arakan have been strucked from citizenship since 1982 and non of they been given citizen or Rohingya ID card, no matter muslim claim what. But it is not enough for Rakhines and government, they want to cleans muslims from the land that is their aim.
Think about why killing of 10 non-Rohingya or non-Bengali on 3 June 2012??? Think why non-Rohingya like Kaman and Rakhine muslims were killed in current crisis???

Other ethnic groups of Burma have only problems with central government and struggling against government. But Rohingya are caught between Rakhine and Government. They both corporately cleansing our people. Now cease-fire Rakhine rebel group-ALP is recruiting 50,000 forces. They may misclaim for safety and security reasons. As, we have information, they already have hundreds of people getting training in ethnic areas.. So the situation for Rohingya would be ever worst than we think. It can be read in Burmese version at-( http://www.narinjara.com/burmese/?p=1173 )
.........................................................
History Behind Arakan State Conflict
Source from Irrawaddy news, 9 July 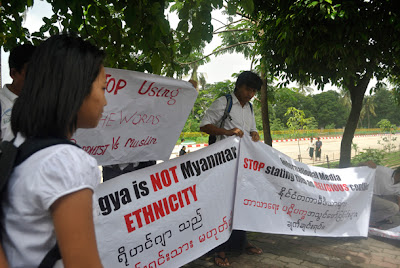 Arakan history expert Dr. Jacques P. Leider gives an exclusive interview to The Irrawaddy in light of the recent sectarian strife in western Burma. Leider has been conducting research as well as contributing articles to academic journals on Arakan State for more than two decades. He has worked with SEAMEO-CHAT, the regional center for history and tradition in Rangoon, and is currently head of the French School of Asian Studies in Chiang Mai, Thailand.

Question: What is the meaning of “Rohingya?”
Answer: [The term Rohingya] appeared for the first time at the end of the 18th century in the report of an Englishman who went to the Chittagong area, the Rakhine [Arakan] area. His name was Francis Buchanan-Hamilton. He was a medical doctor [and this term appeared] in one of the papers that was published by him. Now when we talk about scientific explanations and etymology of the word, it does not say anything about politics. You use this term for yourself as a political label to give yourself identity in the 20th century. Now how is this term used since the 1950s? It is clear that people who use it want to give this identity to the community that live there.


Q: What is the situation on the ground between Arakanese Buddhists and Rohingya Muslims?
A: This is a very difficult question to answer for a foreigner who can only go to places in Rakhine where it is acceptable. I will not call the Rakhine Buddhist racist towards Muslims. There seem to be expression; the emotional reaction is extremely strong. Let me put it diplomatically like this—a very strong emotional reaction.


Q: What are the roots of this reaction?
A: Well, I think from historical point of view, when you look at the situation of Muslims in Rakhine, in Burma, one big difference is that the Muslims in Rakhine have settled on the ground, they were farmers. They have been farmers since the pre-colonial period because Rakhine kings were deporting people from Bengal and bringing them to Rakhine and settling them. We know from a source in the 17th century that there were villages where there were only Muslims. They have been settled there by the Rakhine kings. The English stopped Indian immigration during the colonial period. Because there was no border there, so you figure out the people come and go from Bengal to Rakhine. Their demographic growth was tremendous. The Rakhine back in the 1920s, the Buddhist Rakhine, were feeling very awkward about this.


Q: Do you agree with observers who say there is a third force behind the conflict?
A: There is no reason to look for a third force to explain [the conflict], to describe it and to talk about solutions. It is absolutely clear that in the context where Arakan is, you have a very particular situation which you do not have in other so-called minority areas. In Karen, Kachin or Chin, we’re normally talking about the majority Myanmar who confront the local minority group, which is actually a majority of that area. But here you have three involved—you have Rakhine Buddhist, you have Muslim on the other hand and then you have the government. When you have three, it is always easy to have two against one. Now Muslims would argue they are Rakhine Buddhist and Myanmar Buddhist who play against us. It’s always easy to argue that.


Q: So what is the underlying reason behind the conflict?
A: I think that on the land that exists there, there are increasing numbers of people. Rakhine Buddhists have been seeing that there are Muslims there. The Muslims who are living in Rakhine, the population has been growing. The question is how much have they been growing. Apparently, it seems that they are growing faster. There is a feeling that they are growing; that they are there and there is this kind of resentment that these people are there and nobody is tackling the Muslims present there. All these resentments, all these feelings, have been there for a long time. Sheer violence is used to say that we have situation that we cannot bear anymore.


Q: Would you say it is not a racial issue?
A: No, Rohingya use “racist Buddhists” and the other side will use that. There has been violence, there are a number of other words and we should be sensitive about the use of these words. Now when somebody comes to use the word “genocide” against Muslims, that is also way beyond anything that matches with reality.  I think “hate” is okay as the term you can use as kind of a common word. But to use “racism” always supposes a kind of ideology. I don’t see among Buddhists this kind of ideology. It’s kind of dislike. You have xenophobia, you have ranges of other words you can use to describe more correctly and more justly what we see.


Q: Is the international media mistaken when they use phrases like “genocide of the Rohingya?”
A: Yes, a lot. Journalists have to focus more on diversifying their sources of documentation. I agree it may not be easy. I think there is enormous responsibility on media in Myanmar now that is opening up. Myanmar writers, Myanmar ethnicities take a responsible stand on this. It will not help if they take sides. But you need to be critical and self-critical.


Q: What is the best way forward to resolve the conflict?
A: I would probably say people should sit down and say what they want where there are problems. They want to have peaceful life, they want to have a happy life and see a future for their children. You see other people have what you don’t have. In the other community, in the best of their mind, they realize that the other people will not disappear—like it or not, they are not going to disappear. They need to find one way or another to live together. There are many issues that people who are living there, whatever religion, could share. They will confront their own interest and future for the development of Rakhine State, for the people who live there. If they could work together, they could be more efficient instead of fighting together.


Q: Are the Rohingya an ethnic group of Burma?
A: My answer is that Rohingya is not an ethnic concept. Okay, they can stand up and say we are an ethnic group inside Myanmar. But I think that is not the best way. When you argue we are Muslims and we have been living in Rakhine for several generations, nobody can deny it. For me, Rohingya is the term, which is an old word that has been claimed as above all as a political label after the independence of Myanmar. For the moment, I do not see that all the people there readily submit to one and a single label. When I was in Bangladesh, people pointed out Muslims to me who originally lived in Rakhine. They have now moved to Bangladesh and when you ask them, “are you Rohingya coming from Rakhine?” they say, “no, we are Muslims who live in Rakhine, we do not take for us the label Rohingya.”
Posted by NDPHR at 7/10/2012 12:17:00 pm