Burmese newspaper of 21 July reported- "Public War Coming in Rakhine"
the report said- "Associations like public military will be formed in Maungdaw. It will be formed by ethnic nationals to protect from different races' terrorizing". 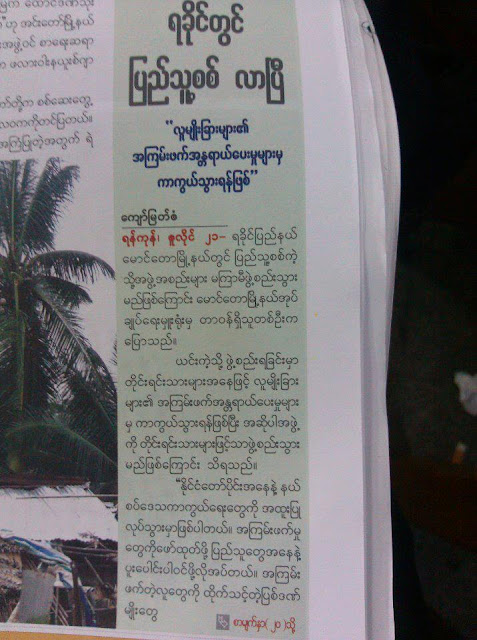 A dozen Muslim students on Monday morning staged a quiet protest in front of Government House in Bangkok, where Myanmar President Thein Sein inspected a guard of honour together with Prime Minister Yingluck Shinawatra.

Ashar Sarimachi, a fourth-year political science student of Thammasat University, led the group, who held placards saying "Stop the massacre of Rohingya".
Mr Ashar said the information released about incidents during the events in Rakhine state last month and had been twisted and was misleading.

"The Rohingya were protrayed as instigators of the spate of violence, but they were actually the abused," said Mr Ashar, chairman of the Confederation of Muslim Students in Thailand.
The 12 student protesters called on the Myanmar government to allow greater humanitarian access to the affected area and for government protection of this minority group.

The statement was issued in the name of five student organisations.

The team seeks urgent solution from the World Body- UN, EU, ASEAN and OIC to immediately end
the crisis according to its statement.

Burmese Rohingya Association in Thailand-BRAT's statement expresses about ongoing summary execution of Rohingya detainees in Buthidaung Prison.
"As we received information from a prisoner who got released recently on Saturday after
completion of two years sentences, in Buthidaung Prison, there are 650 Rohingya detainees
in a compound and daily 5 Rohingyas are dying from inhumane tortures. The dead bodies
were packed by gunny and Rakhines carried away by bamboo pole in every early morning. It
is very horrible that none of these Rohingyas prisoners can walk well and stand strait. They
sent messages to their families that they could not be able to back alive and the wounds they
got were damaged inner parts of organs." 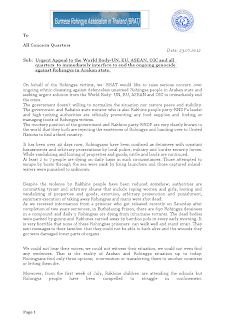