In a written statement to Metrovnews.com, Alie said that Indonesia – the current chair of ASEAN – must be proactive in urging Myanmar to respect human rights and end ethnic tension following a series of clashes in recent months that have left Muslims and Buddhists dead, prompting many Rohingyas to flee. 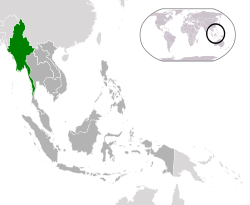 Burma
“Such genocide and exile of the Rohingya Muslims resulting in their lack of nationality is the inhumane behavior of the state,” he said.

The former military government in Myanmar has in the past been accused of denying Rohingyas citizenship and free access to food in an area that has remained largely off limits to foreigners, including aid agencies.
Harsh treatment has prompted hundreds of thousands of Rohingyas to cross the border with Bangladesh over the past two decades where many now live as refugees. Myanmar’s government has in the past considered Rohingyas to be Bangladeshi, while Dhaka says they are from Myanmar.

Rohingyas have also headed for predominantly Muslim Indonesia. Last week, 16 Rohingyas were arrested by police in West Java after heading to Indonesia by boat.


About the author: UCAN

UCA News reports about the Catholic Church and subjects of interest to the Church in Asia. Through a daily service, UCA News covers lay activities, social work, protests, conflicts and stories on the faith lives of the millions of Catholics in Asia.
Posted by NDPHR at 7/26/2012 06:06:00 pm