The OIC expresses grave concern over the situation of Myanmar Rohingya Muslims
Source from OIC, 15 July 2012

The Secretary General of the Organization of Islamic Cooperation (OIC) Ekmeleddin Ihsanoglu, in a statement issued in Jeddah today, strongly condemned the renewed repression and violation of human rights of Myanmar’s Rohingya Muslim nationals since last June 2012 that has resulted in deaths of innocent civilians, burning of their homes and mosques and forcing them to leave their homeland. He added that over the past three decades, the Myanmar’s Rohingya Muslim citizens have been subjected to gross violation of human rights including ethnic cleansing, killings, rape, and forced displacement by Myanmar security forces.
Ihsanoglu said that the recent restoration of democracy in Myanmar had raised hopes in the international community that oppression against Rohingya Muslims citizens would end and that they would be able to enjoy equal rights and opportunities. However, the renewed violence against Rohingya Muslims on June 3, 2012 had caused great alarm and concern to the OIC. He said that when efforts of the international community including the United Nations were underway for a peaceful resolution of the issue, the OIC was shocked by the unfortunate remarks of Myanmar President Thien Sein disowning Rohingya Muslims as citizens of Myanmar. Secretary General stressed that the Myanmar Government as a member of the United Nations and the ASEAN, must adhere to the international human rights instruments including the relevant conventions and declarations, in treatment of their citizens.

Secretary General Ihsanoglu referred to the United Nations declaration that the Rohingya are an ethnic, religious and linguistic minority from western Burma, and historical facts show that Rohingyas have been present in the land of Myanmar centuries before the British came in and after they left, before the formation of Burma, and very clearly before the formation of the current state of Myanmar. In spite of this, the government of Myanmar continues to persecute and discriminate against the Rohingya minority, particularly the citizenship law 1982, which violated international norms by stripping the Rohingyas unjustly of their rights of citizenship.

Ekmeleddin Ihsanoglu hoped that the Myanmar Government would respond to the concerns of the international community in a positive and constructive manner so that all its Rohingya Muslim citizens are able to return to their homeland in honour, safety and dignity. He said that the OIC Charter stipulates the Organization to assist Muslim minorities and communities outside the Member States to preserve their dignity, cultural and religious identity. In this spirit, he also expressed the OIC’s determination to remain seized with the issue and to bring it in the agenda of the concerned international interlocutors including the United Nations, Human Rights Commissions, ASEAN, the EU as well bilaterally with the Myanmar Government, for a peaceful and lasting resolution of the issue. Myanmar should recognize that its new engagement at the international level doesn’t only come with opportunities but also with responsibilities.
...................... 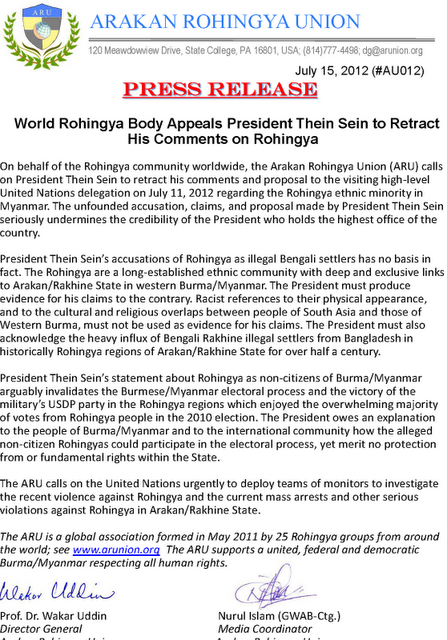