Iran voices concern over mass killings of Muslims in Myanmar 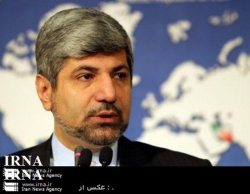 Referring to the reports about mass murder of Muslims in sectarian violence in Myanmar, he called for the immediate intervention of the Myanmar government as well as the international institutions, including the Organization of Islamic Cooperation (OIC) to investigate the case and help for stopping it.

“Respecting other sects and followers of other religions including the minorities is part of beliefs of all religions around the world; it is expected that Myanmar government would do its best to prevent anymore criminal events and acts of violation to happen by boosting the culture of peaceful co-existence of different sects and followers of various religions as well as strengthening of the national unity and in the meantime, safeguarding the rights of the Muslims, there.

According to unofficial reports, more than 20,000 Muslims have been killed, tortured and displaced by the extremist Buddhists in Burma’s Rakhine province, the worst sectarian killing in this part of the world over the years, Pakistan Observer reported on July 13.
The violence had killed 29 people in a day and displaced more than 30,000, said Htein Lin, secretary of the country’s Ministry for Border Affairs.
Around 2,500 houses have been burnt down, Reuters reported on 14th June. Meanwhile, The Telegraph reported on June 21 that more than 80 have been killed in Burma in the month said.
Neither International Organizations, NGO’s, Human Rights Organization, major countries nor Myanmar’s government has proposed a solution for the 800,000 Rohingya, who live in desperate conditions that resemble refugee camps and make up one of the largest groups of stateless people in Asia.

Cruelty toward the Rohingyas is not new. They have faced torture, neglect and repression in the Buddhist-majority land since it achieved independence in 1948. Its constitution closes all options for Rohingyas to be citizens, on grounds that their ancestors didn’t live there when the land, once called Burma, came under British rule in the 19th century (a contention the Rohingyas dispute). Even now, as military rulers have begun to loosen their grip, there is no sign of change for the Rohingyas. Instead, the Burmese are trying to cast them out.
The current violence can be traced to the rape and killing in late May of a Buddhist woman, for which the police reportedly detained three Muslims. That was followed by mob attacks on Rohingyas and other Muslims that killed dozens of people.

Burma has a population 75 million with the Muslim population being just 0.7 million.