The media, the military and the Arakan conflict 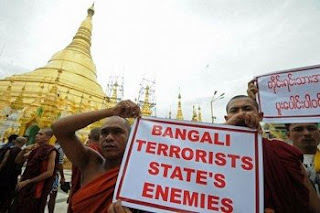 The emergence of free media in Myanmar after six decades of oppression is not going the way anybody expected just weeks ago, and the trend is ominous.

The new publications are openly partisan, nationalist and aiding a deadly war against the already disenfranchised Rophingya minority in the troubled Arakan state alongside the government, nationalist ethnic Rakhines and Buddhist Burmese.

Chiang Mai University in Thailand is organizing a forum for Thursday on Burma’s evolving media landscape, featuring as speakers Aung Zaw, the chief editor of the Irrawaddy, and Mon Mon Myat, co-founder of Yangon Press International. It should be just in time to take on some profoundly disturbing questions about the course the media is taking.

Ironically the newly freed media, especially domestic and Burmese language journals, are saving the domestic image of the infamous military by framing the Arakan conflict as the nation versus foreign invaders – Rohingyas, although they have existed in the area for hundreds of years. That is leading Burma’s citizenry to call upon the military to protect race, religion, and nation, regardless of the military’s 60 years of oppressive rule.

At the outset, it should be mentioned that the media started calling the Rohingyas “Bengali”, “foreign invaders” and “illegal immigrants” as soon as the conflict broke out on June 8. It started framing the conflict as an attack on the nation by “Bengali” foreigners, placing everyone on the same side vis-à-vis the Rohingyas.

Since day one of the conflict, domestic Burmese journals have competed with each other to update the news, often with little basis in fact. The most prominent agencies are The Weekly Eleven, The Voice Weekly, The Yangon Media group, 7Days News, and Popular Myanmar News. The Dhaka-based Narinjara news has been crucial in the anti-Rohingya campaign.

Their reporting is contradictory to international standards. The International Federation of Journalism is opposed to discrimination against any race and religion. It condemns the use of the media as a tool for propaganda, or for promoting intolerance and conflict. The Burmese media rather have done completely the opposite: they have fueled the conflict.

On their Facebook pages, they distribute information that is neither confirmed nor substantiated. For example, The Voice Weekly, a publishing arm of the popular scholarly institution, Myanmar E-gress, posted one sentence-information that there was a bell ring in front of a Buddhist temple; its online audience were anxious to know what just happened. It also posted unconfirmed information that Rohingyas had just poisoned a water pond. The audience was upset and commented, “Kill them all”. The journal consistently refers to Rohingyas as “Bengali Rioters.”

Almost every 5 to 10 minutes, the media update news indicating how many Rakhine villages have been burnt, how many people have been beaten and killed by Rohingyas who are foreigners, illegal immigrants and invaders.

Every single piece of news reported is exclusively about the victimhood of Buddhist Rakhines. The media never quote Rohingya sources, which said tens of people – men, women and children – are being killed, and that houses and mosques were being burnt down.

The media also distributes reports indicating that the security forces have successfully prevented groups of Rohingya trying to enter towns and cities. There was no clarification over whether these groups were refugees running away from the riots or were engaging in violence.

The legitimizing idea of their position is based on nationalism and national security that Bengali invaders are attacking western Myanmar and ethnic brothers and sisters.

When photos are posted, they are about Rohingya youth attacking neighbors. Photos of Rakhines even burning down huts and holding swords are shown as simply self-defense.

The media has also attempted to provide nationalistic coverage to international communities. The Weekly Eleven, the most nationalist media outlet at the forefront of the anti-Rohingya campaign, distributed its English news to international agencies. The Journal reportedly celebrated upon Asian News Network’s publishing of its news.

The Weekly Eleven also accuses foreign media as “presenting biased reports on the clashes between Rakhine people and Bengali Rohingyas to destroy the image of Myanmar and its people”.

Thomas Fuller, however, responded in the New York Times that “In one sign that passions are running high, the Website of the Eleven Media Group, a publisher of one of the country’s leading weekly newspapers, displayed a string of hateful comments about Muslims from readers.”

The conflict in Arakan state puts more internationalized media such as the Burmese services of the British Broadcasting Corporation (BBC), Voice of America (VOA), and Radio Free Asia (RFA), as well as the Irrawaddy and Democratic Voice of Myanmar (DVB) in a difficult position.

But who won the seat in this conflict?

The government and the military are gaining popularity among many hundreds people who are being delusional. This is reflected in the activities of Hmuu Zaw, an ex-Major and currently a senior staff from the President’s Office.

Since the riots are taking place in the remote areas of the country where journalists cannot reach immediately, he is one major player feeding negative narratives to the media. He frequently updated the Arakan situation on his Facebook account. The Burmese journals quoted them.

Quickly earning popularity, Hmuu Zaw effectively distributes government agenda and motivating messages among his 9,909 subscribers and 5,004 friends on his Facebook. The very idea Hmuu Zaw is propagating is all about national security. His explicit messages indicate that without acting effectively, the country’s sovereignty will be undermined. The government is trying its best not to let that happens.

During his visit to the US on 4 July, 2012, he wrote: “Today meeting with Human Rights Watch, Myanmar delegation gave the clear message, if some countries including US, can accept Rohinja (Stateless people), we can transport them by ships or others. We can understand the human rights but we need to emphasize the National Security.”

People wrote comments, supporting and praising him. Up to 10 July, 921 people “like” this status.

At a more institutional level, the Burmese government – including the military and police - is gaining popularity. In the name of protecting the nation and sovereignty, the military has been called upon to take control of the burning state.

One Facebook user commented to Hmuu Zaw’s above status, “The government has already fulfilled the very desire of the entire Burmese. It’s ok not to have electricity for 24 hours, not having low consumer prices, or not getting rich yet. It’s already the most loved government for kicking out dog Bengalis”.

To sum up, the Arakan riot is like a Burmese saying “killing two birds with one stone”. Not just two, but three birds: Rohingyas are down, the military is back in, and foreign and internationalized media are portrayed as unreliable.