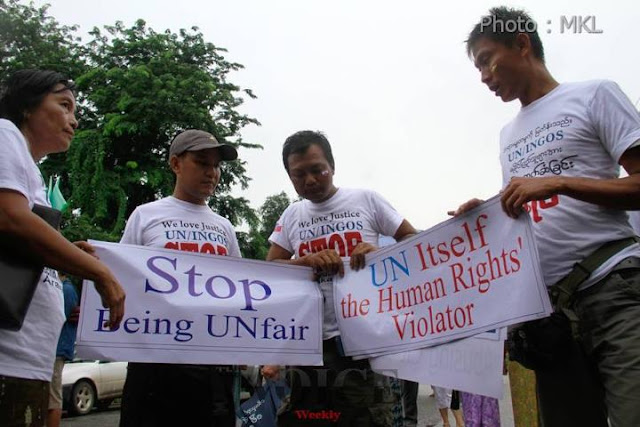 Rakhine people are not protecting Rakhine State as such. You have to understand that we are protecting our mother land's beautiful map from being distorted and its dignity, in addition to race and religion. Not only Rakhine but also all the people know that Kulars have grown up thanks to UN and NGOs that have watered poisonous plants. We recognize those, who work for the further development of Kulars by earning dollars, as traitors. We will no longer sit and watch you stay in our country and work for the Kulars' development. If you want to continue, open your offices in Kular places to be able to wash Kulars' buttocks closely. We cannot stand seeing you lick Kulars' buttocks, opening offices in Sittwe, wearing pants and enjoying your stay in luxury hotels. We believe that the people who rent their houses to those organizations are indirectly supporting to lick Kulars' buttocks. We recognize all of those, who are directly or indirectly working for the development of Kulars, as traitors and thereby our enemy. We will also attack landlords. All Rakhines are responsible. For all Rakhines to know, we will tell you how disgusting and terrifying the UN and NGOs are.

1) UNHCR – Kular United[2] that works for the Kular's economic and social development, education, child protection and social discrimination, and help them achieve their so-called rights. A real Kular United, that protects Kular from being called Kular, based in Geneva, Switzerland. It's been 30 years since they have introduced the term 'stateless people' and supported them to establish a Rohingya country. Kular United that's waiting sneakily for a time to support the Rohingya by providing minimal assistance to Rakhine such as a pot and a blanket. We have to attack them.

2) WFP – Another Kular United that works closely with the UNHCR to provide rice to Kular for their food security and continued education. The organization now cleverly waiting to support Kulars while assisting Rakhines with a small portion of rice. It's a Rome-based organization, working through a Rakhine officer and other Rakhine staff who are licking Kulars' buttocks. We will attack them all.

3) AZG – A Holland and French NGO that is importing arms for Kulars to occupy Rakhine State.

4) ACF – A French Kular NGO, feeding nutritious food for Kulars' future generation to become stronger. We have seen them trying to reopen their office by paying their Rakhine staff double.

5) AMI – A German NGO who is supporting Kulars' health with medicines (Which was cracked down by the people in Buthidaung in 2010). Buthidaung fulfilled their national obligation just as Tunggup[3].

6) Malteser – A German NGO working 90% for Kulars and 10% for Rakhine. The real culprit that systematically cracked down the Buddha Wihara Monastery in Sittwe in 2010. They continue working by paying their Kulars' buttock-licking Rakhine two-fold of their salary. We have to target those who earn double.

7) Save the Children – Save the Muslim organization that is providing daily update on the Kular and Rakhine situation so that other Kular NGOs can come in. Their office is busy every day. Stop now!

8) Solidarites – A Kular French NGOs cunningly waiting by opening half of their office door to support Kular.

9) NCV (Muslim Karuna group) – They have been here less than a week. Nothing assisted to Rakhines. A Muslim group directly supporting Kulars by using a huge amount of money. Using a logo of open palm and the youths organized by 88 generation student leader Ko Mya Aye (a Muslim), they are being active in Sittwe. We will eliminate them.

[1] A derogatory term for Rohingyas (A derivation from the Myanmar word "People who crossed border".)

[2] United Nations in Myanmar is pronounced "Kula Thamaga". If the first word is changed from Kula to Kular, it becomes "Kular United".

[3] The town where unidentified angry mob attacked a bus and killed 10 muslims on 3 June.