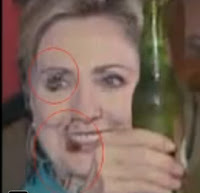 "The satanic forces have united against Islam; the Muslim carnage of Mayanmar has started after the visit of Hillary Clinton. She is the messenger of the Satanic Forces." Raja Mujtaba

Recent upsurge in violence against Rohingya Muslims in Myanmar (Formerly known as Burma) has highlighted the regime’s complete disregard for basic human rights.
While the international conscience awakens slowly, the Muslim minority has already suffered a colossal spell of ethnic cleansing. Accounting for over 1/3rd of total population of Myanmar, 800,000 Rohingyas are neither recognized as citizens nor a minority. They came to Myanmar in the seventh century. They have ever since settled in the western part of the country, the Rakhine state; an area that borders the Chittagong hill tracts of Bangladesh.

Latest spate of genocide has resulted in killing of over one hundred innocent people including women and children. Main executors of these gruesome crimes were Hindu and Buddhist outfits who otherwise portray themselves as pacifists. Buddhist organizations that carried out these gory acts had tacit blessing of the politico-military regime as well as physical and logistic support of Hindu religious extremists. Horrific images and reports coming out of the conflict zone present a scenario of systemic genocide. Events were triggered by a Buddhist girl eloping with a Rohingya boy. In the wake of this innocent occurrence, the so-called peace-loving Buddhists have demonstrated that they could be as violent and gruesome as anyone else.

UN resolution 96 (I) of 1946 states that genocide, whether committed in time of peace or war, is a crime under international law. In 2004, the then UN Secretary General Kofi Annan, announced his ‘Action Plan to Prevent Genocide’, whereby torturing, killing, inflicting physical pain and causing mental harm to any human being or group/community fall under the category of criminal acts punishable under international law. Gross violations of human rights are no longer an inclusive domain of a state.

Myanmar government is of the view that Rohingyas came from India during the British rule. Burmese citizens view them with hostility. They are denied fundamental rights and freedom. The military regime consistently perpetrates human rights violations against these powerless and unprotected people. They are not issued identity cards, and do not have right to basic amenities like education, health and freedom of movement. They also do not have property ownership rights. They are denied government jobs, are subjected to marriage restrictions, and are liable to forced labour. They also face extortion and other coercive practices.
In January 1950, about 30,000 refugees fled from Myanmar to the then East Pakistan. The 1953 population census declared 45 per cent of the Rohingya population having Pakistani origin. Persecution of Rohingyas has been continuing unabated since 1962’ when General Ne Win usurped power in a coup d’état and stripped the Muslims of their Burmese citizenship and cracked down upon them mercilessly. Thousands were forced to flee to neighbouring territories of East Pakistan, Indonesia and Thailand. However, they were turned back cruelly.

In February 2009, five boats packed with Burmese Rohingya were taken out in the high seas and abandoned to die. Four of the boats sank in a storm while one was washed ashore; the few survivors narrated horrifying accounts of torture by Thai authorities before being abandoned at open sea. Bangladesh has always been reluctant to accept Rohingyas. In 1978, an agreement was signed between Bangladesh and Myanmar, according to which, any Rohingya who could produce any documentary evidence of being Burmese could return. However, this did not solve the problem or stop the state-sponsored massacre in 1991.

Last week, the OIC has held a meeting in Geneva. It contemplated on sending a fact-finding delegation to Myanmar. Meeting suggested the diplomats in Myanmar to make a visit to Rakhine State. OIC has forwarded these decisions to the Ambassador of Myanmar in Geneva and has sent a letter to the UN High Commissioner for Human Rights. The OIC Secretary General Ekmeleddin Ihsanoglu has also addressed letters to the President of Myanmar and the leader of opposition, as well as to the UN Secretary General, informing them about the deteriorating situation in Myanmar and the need to act.
Earlier, UN human rights Chief Navi Pillay had warned: “We have been receiving a stream of reports from independent sources alleging discriminatory and arbitrary responses by security forces, and even their instigation of and involvement in clashes,” she said in a statement. In June this year, Amnesty International warned of “credible reports” of abuses — including rape and unlawful killings — by both Rakhine Buddhists and the security forces. Of more than 60,000 persons displaced as a result of latest violence, around 53,000 are Muslims.

However, in a press conference attended by UN Special Rapporteur Tomas Ojea Quintana, Myanmar’s foreign minister Wunna Maung Lwin said the government had exercised “maximum restraint” in bringing an end to the violence in western Rakhine State. “As such, Myanmar strongly rejects the accusations made by some quarters that abuses and excessive use of force were made by the authorities in dealing with the situation... (Myanmar) totally rejects the attempts by some quarters to politicise and internationalise this situation as a religious issue”.

One expected greater compassion from Nobel Peace Laureate Aung San Suu Kyi, but the champion for the oppressed masses has disowned the Rohingya Muslims, categorically stating that they “should not be considered (Burmese) citizens.” Aung San Suu Kyi is not likely to flag the minority issue due to her concern for losing support of the Monks, who were the largest force to stand up against the military.

Now, the issue is of options Myanmar will consider in handling this issue. Viewing it through the prism of international terrorism is a dangerous possibility. The Myanmar authorities may be tempted by this option as they are trying to cosy up with the US, and ‘terrorist twist’ could attract American sympathy and aid. Although Myanmar has been a target of terrorism, it has mainly been carried out by Buddhist groups rather than by Muslims. Stereotyping Rohingyas as Muslim terrorist would enhance the likelihood of international terrorist networks reaching out to Rohingyas. The United Nations should push the Myanmar regime to find out a political solution to the problem while providing constitutional guarantees in the context of protecting fundamental Human Rights of Rohingya Muslims.