The Persecuted Rohingyas Of Myanmar: Need For Political Accommodation And India’s Role – Analysis


The Rohingyas, numbering nearly a million and thereby constituting a significant portion of the approximately 55 million population of Myanmar, are recognised by the UN as one of the most persecuted ethnic minorities in the world. The level of persecution has only varied over the past few years, and has worsened now. General Ne Win, former dictator Premier of erstwhile Burma (now Myanmar), caused the greatest misery to the Rohingyas and started the process of their deprivation by stripping them of Burmese citizenship in 1982. There has been no reversal of this trend by successive military junta leaders. Instead, further socio-economic isolation and persecution has been brought upon the Rohingyas by successive governments in Yangon. As per conditions presently prevailing in Myanmar, the Geneva Convention on Refugees of 1951 and its Protocol of 1967 are being grossly violated in respect of the Rohingyas. 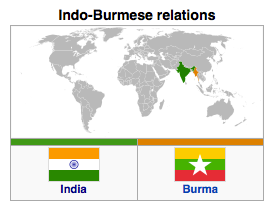 Burma – India Relations
The geographical proximity of the Rohingya-inhabited Rakhine state of Myanmar with Bangladesh has led a large number of Rohingyas to flee to Chittagong, Bandarban and Cox`s Bazar districts of Bangladesh whenever there is political turbulence in Rakhine state. Though centuries ago the Rohingyas had settled down in what is today the Rakhine state of Myanmar, in British India, Rakhine province used to be administered from Chittagong and the Rohingyas moved freely between Bengal and Burma. Therefore, there was some historical affinity between the Rohingyas of Rakhine state and the afore-mentioned adjoining area of Bangladesh. As a result of the June 2012 riots between the Rohingyas and local Buddhists in Rakhine state, nearly 100,000 Rohingyas were affected apart from a large number of local Buddhists; approximately 20,000 Rohingyas fled from the riot affected areas and tried to move into Bangladesh.
Some Rohingyas who had earlier left Myanmar are already housed in miserable conditions in makeshift camps in tentage accommodation in Bangladesh. The position in regard to refugee habitation in Bangladesh was aggravated when new Rohingya refugees started crossing into that country. The Sheikh Hasina Government, already saddled with popular discontent periodically fomented by its political rivals and with elections not too far off, and also under criticism from UN and Human Rights Watch for not allowing international NGOs like Medicines Sans Frontiers, Action Contra La Faim and Muslim Aid UK, did not want to take on the burden of more refugees and consequent strain on the regional economy with attendant local political ramifications. Border Guards Bangladesh have consequently pushed back nearly 1200 of the recent lot of Rohingya refugees who had crossed over into Bangladesh.

While India is not immediately affected by the Rohingya refugee migration from Myanmar, it cannot be oblivious to the regional dimensions of such human migrations based on ethnic discontent. Earlier, the Buddhist Chakmas of Chittagong Hill Tracts of Bangladesh, who had felt discriminated in that country, had migrated to Mizoram state of India. The Chakma presence had been a source of considerable local tension in Mizoram. Any diversion of Rohingya refugees from camps in Bangladesh to adjoining north-eastern states of India would not be acceptable to New Delhi.

The Govenment of India should therefore advise the Myanmar Government with a degree of sensitivity and without appearing to be overtly interfering in Myanmar`s internal affairs to ensure a more effective administrative presence and even-handed developmental activity in Rakhine state. At the same time, an approach in concert with the Bangladesh Govenment may also be contemplated to induce the Myanmar Government to provide basic rights of livelihood with respect to employment, trade and educational opportunities to their Rohingya people, even if it has to be without conferring on them citizenship and voting rights. This would be in consonance with India`s broad stance on refugee rehabilitation in the region. At present, the Rohingyas of Myanmar are not only stateless, but are also prevented from earning a proper livelihood and observing their culture and religion in their present places of domicile in the Rakhine state, except in a few towns like Marringdaw near the Myanmar-Bangladesh border.
The ethnic turbulence in the Rakhine state of Myanmar involving the Muslim Rohingyas and local ethnic Buddhists has also added an uncertain element in the Myanmar Government`s approach to its minorities, which also has future geopolitical ramifications for both Bangladesh and India. Such disturbances can not only be a cause of another home-grown insurgency, but also set off a chain reaction of ethnic demands and counter-demands among the different ethnic groups in Myanmar. Aung San Suu Kyi, despite her political ascendancy, seems to be playing a cautious role. She has not come out with appeals for ethnic accommodation after the Rakhine riots, nor taken any decisive public posture – except for making some cursory remarks before the June 2012 riots about a more integrative approach vis-à-vis the minorities of Myanmar. It is obvious that she does not want to lose her constituency among the majority Burmans. Therefore, efforts perforce will have to be made by New Delhi through the Thein Sein Government at Naypidaw, which is still backed by the Myanmar military, to bring about more political accommodation in Myanmar, not only in the interest of political consolidation in that country but also to deny safe haven or a regrouping place for fissiparous elements or potential insurgents who may destabilise the areas encompassing Chittagong-Bandarban-Cox`s Bazar and Rangamati districts of Bangladesh as well as Mizoram and southern Assam in India, apart from the western strip of Myanmar.

The author was Additional Controller of Defence Accounts and has served as Financial Adviser of the North Eastern Council with Government of India.
Originally published by Institute for Defence Studies and Analyses (www.idsa.in) at http://www.idsa.in/idsacomments/ThePersecutedRohingyasofMyanmar_gsen_130812