Kuwaiti lawyer Nasir Guneym ez-Zeyd criticized the UN, stressed that Turkey led all Arab countries and others in the world with its assistance to Rohingya Muslims. 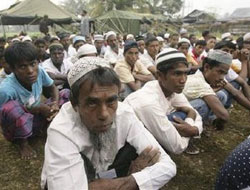 Deputy Chairman of the Kuwaiti Chamber of International Mediation and Arbitration, lawyer Nasir Guneym ez-Zeyd on Saturday criticized the United Nations (UN) for only watching the violence against the Rohingya Muslims in Myanmar.

Speaking to the Anadolu Agency (AA) in Istanbul where he attended an international conference on Myanmar, ez-Zeyd underlined that many international organizations did not extend the necessary support to the Rohingya Muslims.